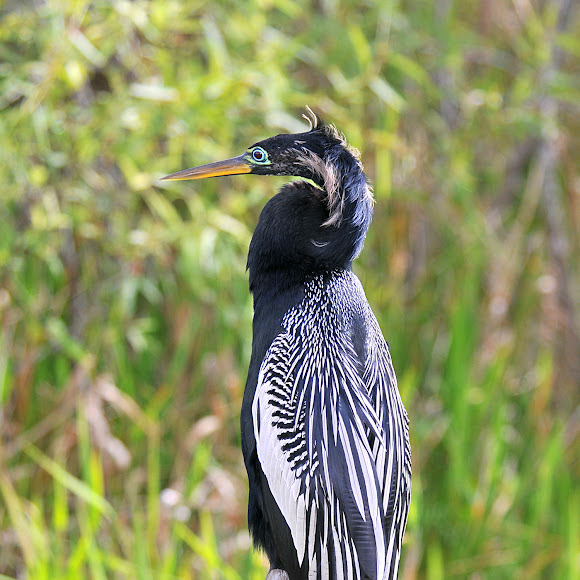 Adult Description •Large, dark water bird. •Long thin neck. •Long, thin, pointed bill. •Long tail. •Silver patches on wings. A bird of southern swamps, the Anhinga is known as the Water-Turkey for its swimming habits and broad tail, and also as the Snake-Bird for its habit of swimming with just its long head and neck sticking out of the water.

The Anhinga lives in shallow, slow-moving, sheltered waters and uses nearby perches and banks for drying and sunning. It's rarely found out of freshwater except during severe droughts. Generally not found in extensive areas of open water, though it may nest on edges of open bays and lakes. Breeds near freshwater, often in association with other waterbirds such as herons, egrets, ibises, storks, and cormorants. The Anhinga may also breed in saltwater colonies and feed in fresh water.

The Anhinga dives from the surface of the water and swims slowly underwater stalking fish around submerged vegetation. The diet consists of many small- to medium-sized wetland fishes, with very small amounts of crustaceans and invertebrates. Anhingas typically spear fish through their sides with a rapid thrust of their partially opened bill. Usually stabs with both mandibles, but may use upper mandible only on small fish. The side-spearing habit of the Anhinga suggests that the usual hunting method is by stalking rather than pursuit.