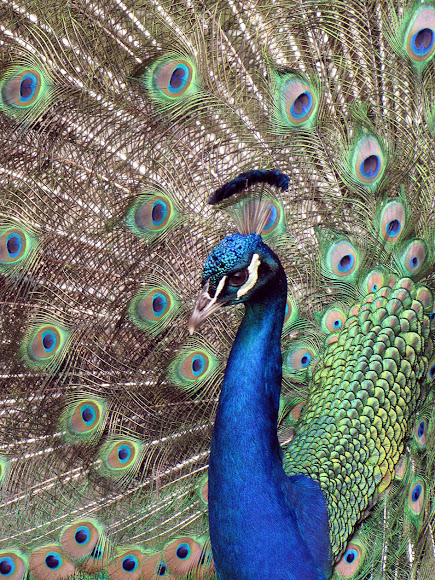 "Charles Darwin first theorized in On the Origin of Species that the peacock's plumage had evolved through sexual selection. This idea was expanded upon in his second book, The Descent of Man and Selection in Relation to Sex. “The sexual struggle is of two kinds; in the one it is between individuals of the same sex, generally the males, in order to drive away or kill their rivals, the females remaining passive; whilst in the other, the struggle is likewise between the individuals of the same sex, in order to excite or charm those of the opposite sex, generally the females, which no longer remain passive, but select the more agreeable partners." -- Wikipedia Funnily enough, while I was visiting Down House, Charles Darwin's home, there were Peacocks strolling through town and calling loudly.

Thanks Carol Milne, YukoChartraw, and Jakubko. I'm reading a book called Bird Sense by Birkhead and in addition to birds being so colorful as an expression of sexual selection, like peacocks, some birds are colorful to let predators know they taste bad! Just like bright butterflies!

Lol...too funny! But sometimes the smarter females choose the males that are not the flashiest because they don't always make the best mates!

Lisa, did you look at martinl's comment -- it's the best.

martinl, you made me laugh out load with your astute comment about fast, red cars! :D

Good info Ava. The female has a vested interest to select the strongest male. The brightest or largest male will father almost all chicks and if we remove some of the feathers, this male will be selected by few females. If we paint the feathers purple or add even longer feathers, it favors that bird. More is better. Sexual selection is important to understand colors in birds, lizards, fish and fast red cars in humans. Its called the peacock syndrome.