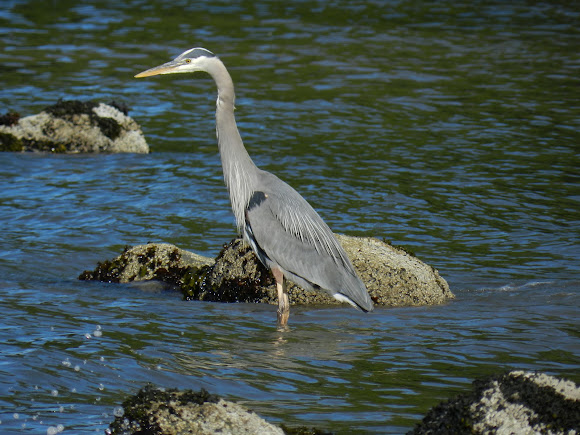 "It is the largest North American heron and, among all extant herons, it is surpassed only by the Goliath Heron and the White-bellied Heron. It has head-to-tail length of 97–137 cm (38–54 in), a wingspan of 167-201 cm (66-79 in) a height of 115–138 cm (45–54 in) and a weight of 2.1–3.3 kg (4.6–7.3 lb). Notable features include slaty flight feathers, red-brown thighs, and a paired red-brown and black stripe up the flanks; the neck is rusty-gray, with black and white streaking down the front; the head is paler, with a nearly white face, and a pair of black plumes running from just above the eye to the back of the head. The feathers on the lower neck are long and plume-like; it also has plumes on the lower back at the start of the breeding season. The bill is dull yellowish, becoming orange briefly at the start of the breeding season, and the lower legs gray, also becoming orangey at the start of the breeding season. Immature birds are duller in color, with a dull blackish-gray crown, and the flank pattern only weakly defined; they have no plumes, and the bill is dull gray-yellow. Among standard measurements, the wing chord is 43–48 cm (17–19 in), the tail is 15.2–19 cm (6.0–7.5 in), the culmen is 13.1–15.2 cm (5.2–6.0 in) and the tarsus is 15.7–21 cm (6.2–8.3 in). The heron stride is around 22 cm (9 in), almost in a straight line. Two of the three front toes are generally closer together. In a track the front toes as well as the back often show the small talons." -Wikipedia

"The Great Blue Heron is found throughout most of North America, as far north as Alaska and the southern Canadian provinces. The range extends south through Florida, Mexico and the Caribbean to South America. Birds east of the Rocky Mountains in the northern part of their range are migratory and winter in Central America or northern South America. From the southern United States southwards, and on the Pacific coast, they are year-round residents. However their hardiness is such that individuals often remain through cold northern winters, as well. It can be found in a range of habitats, in fresh and saltwater marshes, mangrove swamps, flooded meadows, lake edges, or shorelines, but always close to bodies of water, usually nesting in trees or bushes. It has been recorded as a vagrant in England, Greenland, Hawaii, and the Azores." -Wikipedia

Please consider adding this spotting to the mission BC Breeding Birds -
http://www.projectnoah.org/missions/9990...

Welcome to Project Noah, rjarman79. Very nice photo of your Great Blue, and fantastic information. I look forward to seeing more of your spottings, in the future.