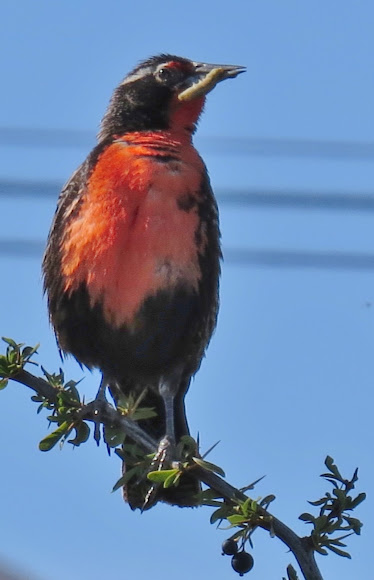 Spotted this brightly colored male Long-Tailed Meadowlark perched on a calafate branch (Berberis buxifolia) with a caterpillar or larva in its beak. The Laguna Nimez Reserve, El Calafate, Argentina is an IBA Important Bird Area with over 80 species of birds, both Patagonian residents and migrants.

The Long-tailed Meadowlark is a common and widespread inhabitant of open country in lowlands and middle elevations of the cone region of southern South America in Argentina and Chile, as well as the Falkland Islands. The male is scalloped black, brown and gray on the upperparts, with a white supercilium and malar, and a black cap and auriculars, The lores, throat, chest, and belly are red bordered with black, and the underwings are white (a useful and distinctive mark in flight). The female is similarly patterned, with brownish upperparts and underparts, a white supercilium and throat, and a wash of pale pink to the belly. This species can easily be confused with the smaller Pampas Meadowlark (Sturnella defilippii), the male of which shows black underwings. The Long-tailed Meadowlark forages on the ground in fields, but often perches on fences and sticks. http://neotropical.birds.cornell.edu/por...