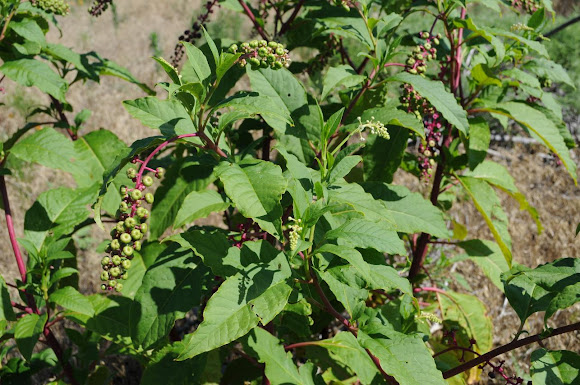 American Pokeweed is a large semi-succulent herbaceous perennial plant growing up to 10 feet (3 meters) in height. It is native to eastern North America, the Midwest, and the Gulf Coast, with more scattered populations in the far West. It is also known as Virginia poke, American nightshade, cancer jalap, coakum, garget, inkberry, pigeon berry, pocan, pokeroot, pokeweed, pokeberry, redweed, scoke, red ink plant and chui xu shang lu (in Chinese medicine). Parts of this plant are highly toxic to livestock and humans, and it is considered a major pest by farmers. Nonetheless, some parts can be used as food, medicine or poison. The plant has a large white taproot, green or red stems, and large, simple leaves. White flowers are followed by purple to almost black berries, which are a good food source for songbirds such as Gray Catbird, Northern Cardinal, Brown Thrasher, and Northern Mockingbird. (information from Wikipedia)

As mentioned in the description, this plant is edible under the right circumstances. I used to work with a Native American woman who would harvest it in the summer and take the leaves home for cooking. [RECIPE: http://www.grandpappy.info/rpoke.htm ] This dish is usually called "polk sallet" (or "polk salad"), and was immortalized in song in 1968 by Tony Joe White when he penned "Polk Salad Annie." It was recorded by several other artists, the most notable being Elvis Presley. His is personally my favorite version and he sang it a lot in concert throughout the 1970s. [VIDEO: http://www.youtube.com/watch?v=5WJyhHqUH... ]

I know this spotting seems boring but I have included a recipe and an Elvis video in the Notes section! :-)