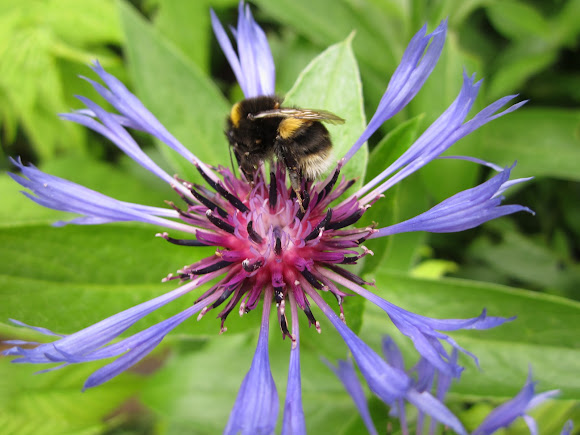 this is either a buff tailed bumblebee or a white tailed bumblebee, i will investigate this further. The White-tailed Bumblebee is a very common bumblebee which emerges early in the spring and can be seen feeding on flowers right through to the autumn. It can be found in gardens, farmland, woodland edges, hedgerows and heathland: anywhere there are flowers to feed on. As with other social insects, the queen emerges from hibernation in spring and starts the colony by laying a few eggs that hatch as workers; these workers tend the young and nest. Males emerge later and mate with new females who are prospective queens. Both the males and old queen die in the autumn, but the new queens hibernate. How to identify The White-tailed Bumblebee has black and lemon-yellow bands and a white 'tail'. There are several very similar species which can be very difficult to tell apart: the Buff-tailed Bumblebee, for example, has black and dull yellow bands, and a buff-coloured tail, instead of a bright white one. Where to find it Widespread. Buff-tailed bumblebee Buff-tailed bumblebees are the UK's largest bumblebee species. The queen is the only one that has the buff-coloured tail, the workers all have white tails. The queen emerges in the spring after hibernating through the winter, and goes looking for a nest site. At the height of its success, a buff-tailed bumblebee colony may contain 150 workers.