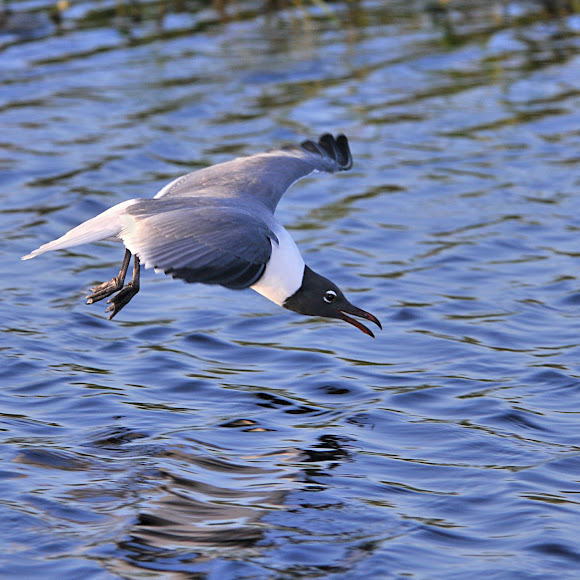 Medium-sized gulls with fairly long wings and long legs that impart a graceful look when they are flying or walking. They have stout, fairly long bills. Laughing Gulls are medium gray above and white below. Summer adults have a crisp black hood, white arcs around the eye, and a reddish bill. In winter, the hood becomes a blurry gray mask on a white head. The legs are reddish black to black.

Laughing Gulls are primarily coastal gulls and are only rarely found far inland. Look for them along beaches, in saltmarshes, in mangroves, or on agricultural fields or landfills near the coast. They nest in saltmarshes, on islands including artificial ones created from dredge spoils, and on sandy beaches—the main requirements being safety from terrestrial predators. They form colonies up to 25,000 pairs in size, and they are occasionally joined by species such as terns, larger gulls, Black Skimmers, and American Oystercatchers. On migration and in winter, Laughing Gulls are found along coasts and in bays and estuaries, as well as in landfills and on lakes a little ways inland.

Nest colonies in the northeastern United States were nearly eliminated by egg and plume hunters in the late 19th century. Populations have increased over the last century, following protection. The male and female Laughing Gull usually build their nest together. If a male cannot find a mate, he may start building a nest platform and then use it to attract a female. The Laughing Gull is normally diurnal, or active during the day. During the breeding season it forages at night as well. It usually looks for food along the beach at night, but will also hover to catch insects around lights. The adult Laughing Gull removes the eggshells from the nest after the eggs hatch. If the shells are not removed, a piece can become lodged on top of the slightly smaller unhatched third egg and prevent it from hatching. The Laughing Gull’s species name is cachinnans, which is a 10-dollar word that comes from Latin and means to laugh heartily. Linguists believe that the word came about because it sounds like laughing—try saying it and see if you agree. The oldest known Laughing Gull was 22 years old.