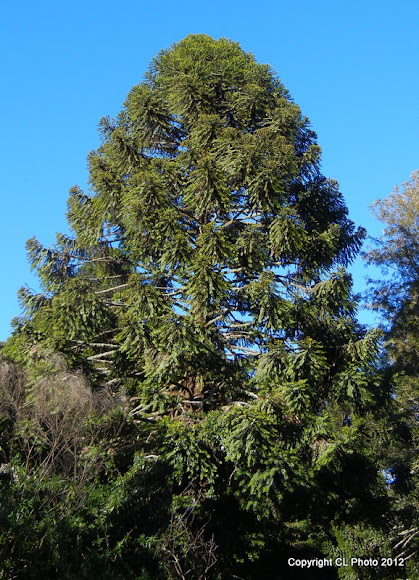 This photo was taken in Bunya Mountains National Park (declared in 1908). It is Queensland’s second oldest national park and it shelters the world’s largest stand of ancient Bunya Pines (Araucaria bidwillii) and more than 30 rare and threatened species.

A walk though the bunya pine forest takes you back to prehistoric times when ferns, followed by gymnosperms (cone-bearing plants such as conifers), then flowering plants appeared. The Bunyas are now rich in all these plant types. Conifers, including the ancestors of the bunya pine and hoop pine, replaced ferns as the major vegetation about 200 million years ago. Despite their name, neither are true pines. They belong to the cone-bearing Araucariaceae family, which was once distributed worldwide but is now restricted to Australia, New Guinea, New Caledonia, New Zealand, islands in the Pacific and South America (from where the family gets its name). Araucarias were a major part of Australia's forests in wetter times. Today bunya pines (Araucaria bidwillii) are mainly found between Gympie and the Bunya Mountains, with a small population in the wet tropics of northern Queensland giving a hint to their past distribution. Bunya Mountains National Park protects the largest stand of bunya pines in the world today.

From December to March, bunya pines drop cones containing edible seeds known as bunya ‘nuts’. Heavy crops occur about every three years. For countless generations, large groups of Aboriginal people gathered at the Bunya Mountains to take part in what today are known as the bunya festivals, coinciding with this natural event. Custodians of the Bunya Mountains and Blackall Ranges (nearer the coast) invited people from as far south as the Clarence River in northern New South Wales, west to the Maranoa River and east to Wide Bay to join the gatherings. For local and visiting groups, the bunya festivals were times for ceremonies, law-making and resolving disputes, renewing friendships, passing on lore, sharing ideas and revitalizing spirituality.

That's a healthy looking one.