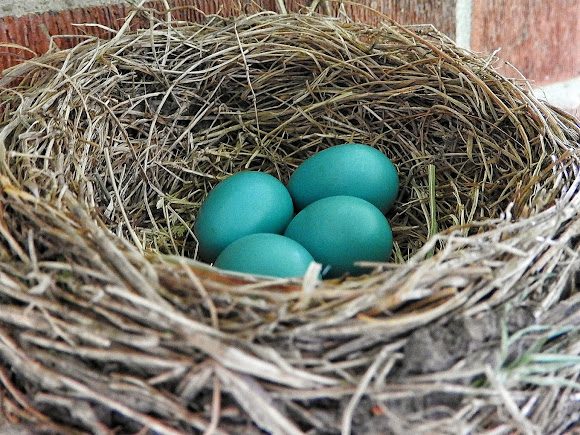 The average robin nest is 6-8 inches across and 3-6 inches high. Robins tend to lay one egg per day for an average clutch size of 3-5 beautiful blue eggs. The nest is incubated by the female alone, and the eggs hatch within 12-14 days. Both male and female taking care of the feeding and the disposal of the fecal sacs, and the baby robins fledge within 12-14 days. Robins have black or gray heads, mostly yellow beaks, brown backs, red/rusty chests, and white bellies and undertail coverts.

Nests are built in evergreen trees, deciduous trees, and near homes and under eaves if those areas provide enough shelter. Robins are not cavity nesters so they don't usually use a bird house or nesting box for nesting. American Robins are common across the United States in parks, yards, gardens, pastures, and golf courses.

This nest was found on the back of our house under the eaves, in the crook of the gutter elbow. The mother was always leery of me but she tolerated me watching her from a distance, and when she was not at the nest I would climb up on a chair and get a close up shot of the eggs and the babies after they hatched. I watched many feedings, the mom would feed one hatchling a worm, them grab that hatchling's fecal sac and fly off with it, then the dad would fly up with another worm and feed another hatchling. There were times I watched either mom or dad waiting in a nearby tree with a coiled worm held in its beak waiting for the other parent to leave the nest so they could take their turn feeding. The process was repeated several times, more than enough for each hatchling to be fed once. I also had a chance to see at least one of the fledglings fledge, and later helped it to safety when I found it on my back porch in the morning before I let my dog out.

Your spotting has been nominated for the Spotting of the Week. The winner will be chosen by the Project Noah Rangers based on a combination of factors including: uniqueness of the shot, status of the organism (for example, rare or endangered), quality of the information provided in the habitat and description sections. There is a subjective element, of course; the spotting with the highest number of Ranger votes is chosen. Congratulations on being nominated PrincesSquishy!