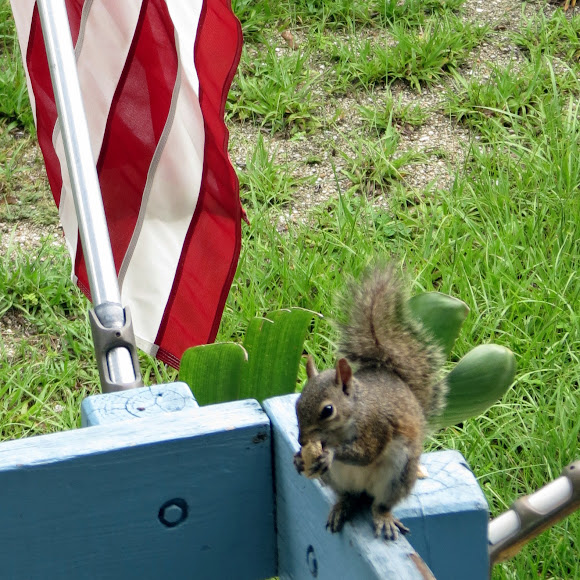 Eastern Gray Squirrel or Grey Squirrel (Sciurus carolinensis) eating a peanut at the base of "Old Glory." Blue Jay (Cyanocitta cristata) lands on flag pole to check out the squirrel. << Eastern gray squirrels eat a range of foods such as tree bark, berries, many types of seeds and acorns, walnuts, and other nuts, and some types of fungi found in the forests.... >>

The eastern gray squirrel or grey squirrel (Sciurus carolinensis), is a tree squirrel in the genus Sciurus native to the eastern and midwestern United States, and to the southerly portions of the eastern provinces of Canada. The native range of the eastern gray squirrel overlaps with that of the fox squirrel (Sciurus niger), with which it is sometimes confused, although the core of the fox squirrel's range is slightly more to the west. A prolific and adaptable species, the eastern gray squirrel has been introduced to, and thrives, in several regions of the western United States. It has also been introduced to Britain, where it has spread across the country and has largely displaced the native red squirrel, Sciurus vulgaris. In Ireland, the red squirrel has been displaced in several eastern counties, though it still remains common in the south and west of the country. There are concerns that such displacement might happen in Italy and that gray squirrels might spread from Italy to other parts of mainland Europe. The genus, Sciurus, is derived from two Greek words, skia, meaning shadow, and oura, meaning tail. This name alludes to the squirrel sitting in the shadow of its tail. The specific epithet, carolinensis, refers to the Carolinas, where the species was first recorded and where the animal is still extremely common. In the United Kingdom and Canada, it is simply referred to as the "grey squirrel". As the name suggests, the eastern gray squirrel has predominantly gray fur but it can have a brownish color. It has a white underside and a large bushy tail. Particularly in urban situations where the risk of predation is reduced, both white- and black-colored individuals are quite often found. The melanistic form, which is almost entirely black, is predominant in certain populations and in certain geographic areas, such as in large parts of southeastern Canada. There are also genetic variations within these, including individuals with black tails and black colored squirrels with white tails. The head and body length is from 23 to 30 centimetres (9.1 to 12 in), the tail from 19 to 25 centimetres (7.5 to 9.8 in) and the adult weight varies between 400 and 600 grams (14 and 21 oz). Eastern gray squirrels eat a range of foods such as tree bark, berries, many types of seeds and acorns, walnuts, and other nuts, and some types of fungi found in the forests, including fly agaric mushrooms (Amanita muscaria). (credit: http://en.wikipedia.org/wiki/Eastern_gra......)

sofi1,
Thanks! Glad you enjoyed my Fourth of July images...