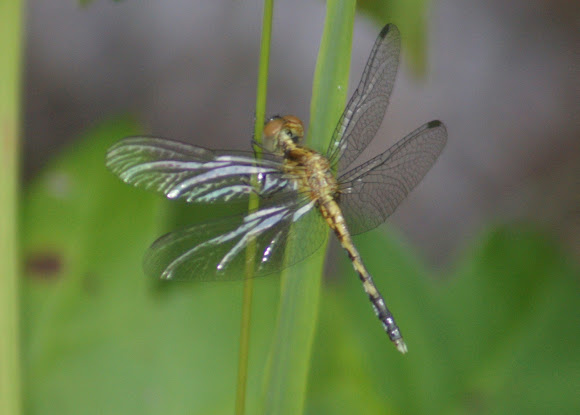 This Little Blue Dragonlet dragonfly is a teneral (immature) male. Typical length for the species is 25 mm. Adults are small and blue with a dark face and a black tip to the abdomen. The cerci are white but may fade to pale brown. Much smaller than the similar Blue Dasher which has a white face. Seaside Dragonlet is a bit larger and darker and does not show the distinct contrast of blue and black on the abdomen. Elfin Skimmer is even smaller, lacks the black abdomen tip, and its eyes are banded with white.

Range is Mostly southeastern U.S., but occasionally found as far north as Pennsylvania and New York. This one was observed along the Petersburg section of the Bartram Trail near Lake Thurmond in Columbia County, GA.

This one was confirmed on Odonata Central.