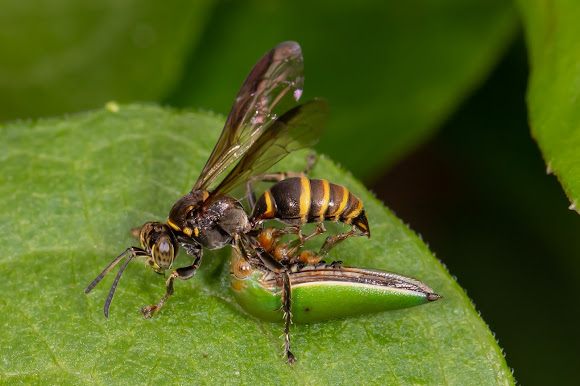 Half open clearing in the forest. The nest is usually found in stony or sandy areas, sometimes next to a creek. I did not see any nest in the surroundings.

There are about 80 species of Hoplisoides worldwide. Usually each member of the genus has its own genus or family as preferable prey. Many of them take always the same species, mostly from Membracidae, Cicadellidae or Fulgoridae. For easy transports the prey is positioned belly-to-belly. Do you remember this kind of wasps? Yes, it is indeed a mimicry of a kind of social wasp, for example Brachygastra lecheguana, which is quite common and abundant, not really aggressive, but knows to fight. This is also accepted by the birds like tyrants and flycatchers. During looking out for their treehoppers, sand wasps usually has to expose, which makes them vulnerable. But having many other, similar and more dangerous looking ones around make the sand wasp "safer".

Just look at that jungle. No wonder it gives up such amazing stuff.