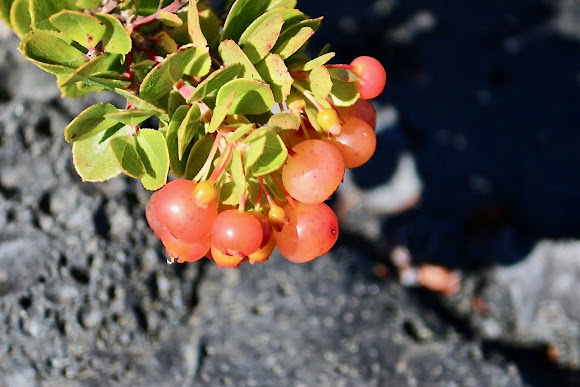 Edible berries, native to Hawaii, which belong to the same genus as blueberries, cranberries, huckleberries and more. They have a sort of waxy appearance.

This wild plant grew from lava flows in Hawaiʻi Volcanoes National Park and favors disturbed environments. It is no wonder that it’s able to tolerate 9-10 inches of ash fall from volcanic activity!

In Hawaiʻi, ohelo is mainly found on the Big Island and Maui, but also occurs on the other islands. In 2010, scientists cultivated "Vaccinium reticulatum Smith," for the first time in order not only to cater to the market but also curb habitat destruction from overly eager berry-pickers.