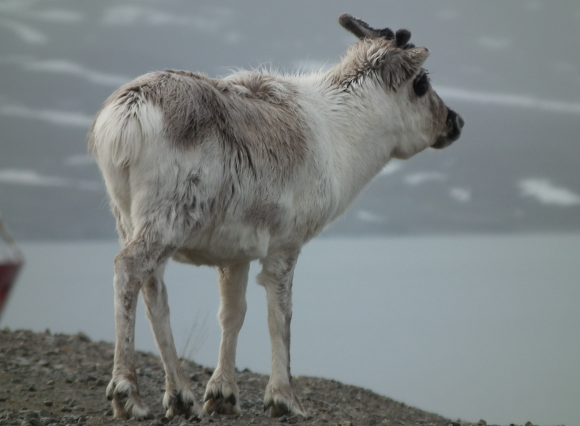 Reindeer are found throughout the Arctic, but those found on the Svalbard archipelago form a distinct sub-species. They are the smallest sub-species of reindeer (dwarfism is common in populations of mammals that are isolated on small islands), with males reaching no more than 160cm in height full grown. They are also quite solitary, found in groups of no more than 3-5 outside of breeding season. The fur is thick, dark brown on the back and pale underneath.

Reindeer are found in the Arctic and very northern regions of North America, Europe and Asia, most often in the tundra and taiga areas.

We were lucky enough to find a few individuals wandering through Ny-Alesund when we stopped off in Svalbard for a little break. They are very small, I originally thought the first individual was a lost calf, but it's in fact a young adult male. He was not shy and I got quite close to him! I saw the full grown male off in the distance.

what a lovely spotting!

Yes, this little guy was super cute! In the distance you can indeed see ice, there are several glaciers in the fjord and icebergs were constantly being formed! It was really cool, and a nice backdrop :)

Fabulous beastie!. Quite cute actually non? Is that ice in the distance last shot or maybe land?