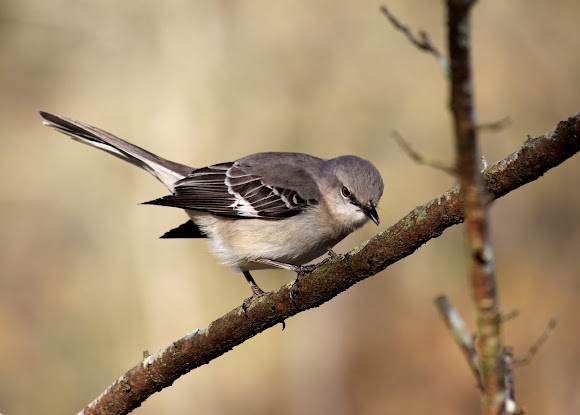 The king of the back yard. Ever vigilant, this mockingbird spends his day chasing all other birds away from his stuff: "That's my yaupon holly tree, my grass, my azalea bush, my bread crumbs, my oak tree. Mine! And all you cardinals, blue jays and crows can just clear off, yes?" Lots of personality.

The Northern mockingbird's scientific name means "many-tongued mimic" and they incorporate bits of the sounds of their environment into their songs. My mother knew one who could imitate the sound of her telephone ringing ... there was much running back into the house to answer until she figured it out. Mockingbird nests are usually built low to the ground, so you can get pretty close to them. My grandmother used to tell a story about standing near nursery nests, whistling the opening notes of well-known songs over and over and ending up with mockingbirds that sang those songs as adults. They also imitate the songs of other birds.

I joked about this mockingbird's possessiveness, but it's fearless about defending its territory. I saw him engage a much larger blue jay in mid-air, talons tangling, tumbling, both birds crying out ... but mostly the jay. He won, the blue jay retreated (temporarily) and the mockingbird resumed his watch from the top of a yaupon.

Mockingbirds are year-round residents. Noted for their intelligence, they are known to recognize individual humans and don't seem to startle easily when people are on their turf. The bird in these photos allowed me to get within five or six feet with my camera ... watching, curious. As a result, these aren't the only nice photos I took of him over two or three days.

Thanks so much, surekha, he was really fun to photograph.

I love this series and the info, Suzanne! Nice photos indeed!

Thanks very much, ChristyHolland and Ava T-B. I like the fourth photo, too, Christy. But I chose the first one because he looks like he's about to jump on another bird trespassing on his territory. Which, in fact, he was ... and did.

I love this! My fave is your 4th pic. Wonderful series!

Thanks so much, Cynthia. Good memories ... old and new.

Thanks, Neil .. kind of inspires me to grow an attitude, too. Ho!

haha. I love a little bird with attitude. Great photo series and I really enjoyed the story :-)

Yes, you do ... they are so very definite in their opinions!

you have to love these guys!

Thank you, AntonioGinjaGinja and Maria dB.

I was hoping that you would help me out with some of the plant IDs! Its been great being at home - have been to a few nature reserves over the past two weeks. Lots of lovely things to see!

Thank you, staccyh ... I've been seeing all your new spottings today. Going to take a closer look this evening. Looks like you've been busy!

Thanks for the nice comments, Mark Ridgway, RiekoS and Marta Rubio Texeira, and thanks also to the folks who sent encouragement with their likes.

Ha,ha! Nice way to describe the mockingbird's personality. I love how they imitate all kinds of sounds too!