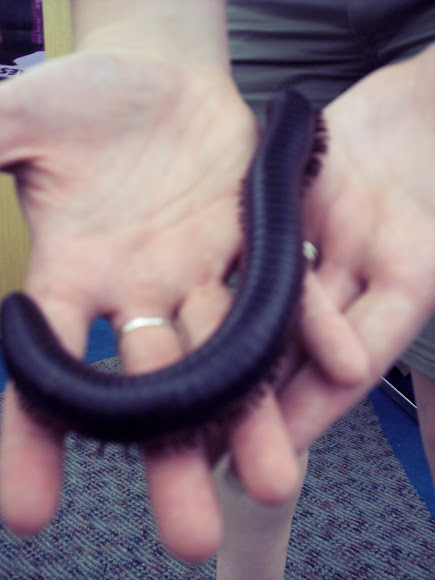 Giant millipedes have two main modes of defence if they feel threatened: curling into a tight spiral exposing only the hard exoskeleton, and secretion of an irritating liquid from pores on their body. This liquid can be harmful if introduced into the eyes or mouth

is a widespread species in lowland parts of East Africa, from Mozambique to Kenya, but rarely reaches altitudes above 1,000 metres. It lives mostly in forests, but can also be found in areas of coastal habitat which contain at least a few trees. It is known in Zulu as amashongololo. It is also native to Southern Arabia, especially in Dhofar.

brought to the library from the phx zoo

no it didn't bite...lol I'm a lot more scared of snakes than creepy crawlies but then snakes around here are very poisonous

Colossal! It doesn't bite? I'd rather hold a snake.

yeah but it's awesome too

Wow the is huge