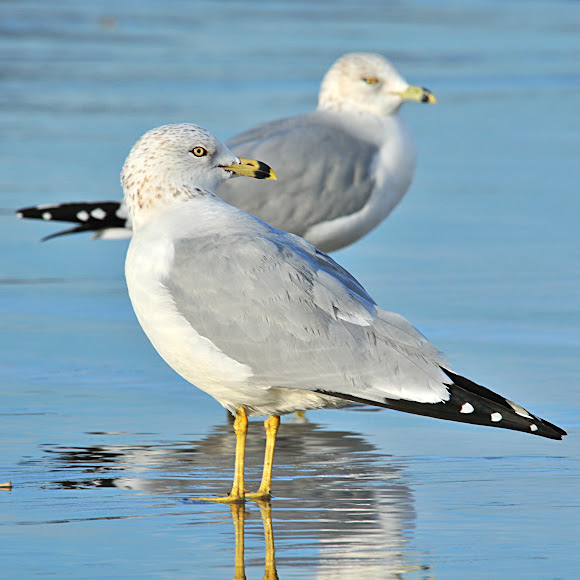 The California Gull is the "seagull" that came to the aid of Mormon settlers in Utah, helping rid their crops of a plague of grasshoppers. A golden statue in Salt Lake City commemorates the event, and in recognition the California Gull was made the state bird of Utah. The California Gull, like most gulls, is an opportunistic feeder, eating anything it can catch or scavenge. It has an odd foraging strategy for catching alkali flies along the shores of salty lakes in the Great Basin. It starts at one end of a huge raft of flies sitting on the beach and runs through the flies with its head down and bill open, snapping up flies. Both parents incubate the eggs, taking turns throughout the day at about three to four hour intervals. Usually an adult calls as it flies into the nest area. The incubating gull stands up and gives several "Long Calls" as its mate lands near the nest. The returning mate joins in calling, and the pair sometimes walks around their tiny territory together. Sometimes the incubating bird does not stand up right away, and the returning mate has to resort to making different display calls, presenting nest material to the incubator, or physically nudging the bird to get it off the nest. Two different subspecies of California Gull exist. The gulls that breed in the Great Basin region of the western United States are smaller and darker backed, and those breeding in the Great Plains are larger and paler.