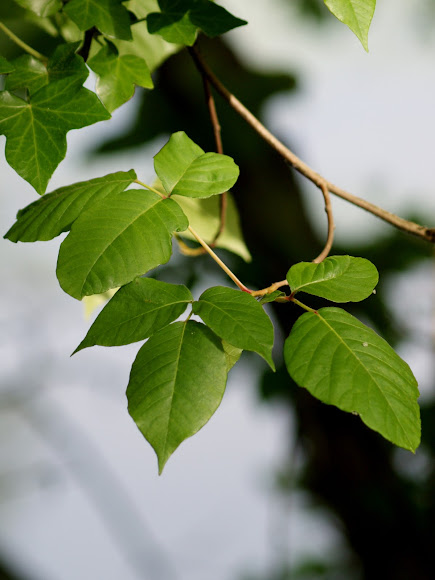 Poison Ivy is a poisonous North American and Asian flowering plant that is well known for causing an itching, irritating, and sometimes painful rash in most people who touch it, caused by urushiol, a clear liquid compound in the sap of the plant. It is variable in its appearance and habit, and despite its common name it is not a true ivy. The deciduous leaves of T. radicans are trifoliate with three almond-shaped leaflets. Leaf color ranges from light green (usually the younger leaves) to dark green (mature leaves), turning bright red in fall; though other sources say leaves are reddish when expanding, turn green through maturity, then back to red, orange, or yellow in the fall. The leaflets of mature leaves are somewhat shiny. The leaflets are 3–12 cm (1.2–4.7 in) long, rarely up to 30 cm (12 in). Each leaflet has a few or no teeth along its edge, and the leaf surface is smooth. Leaflet clusters are alternate on the vine, and the plant has no thorns. Vines growing on the trunk of a tree become firmly attached through numerous aerial rootlets. The vines develop adventitious roots, or the plant can spread from rhizomes or root crowns. The milky sap of poison ivy darkens after exposure to the air.

T. radicans grows throughout much of North America. It is normally found in wooded areas, especially along edge areas where the tree line breaks and allows sunshine to filter through. It also grows in exposed rocky areas, open fields and disturbed areas. This one was growing at Brick Pond Park in North Augusta (Aiken County), SC.

T. radicans is commonly eaten by many animals, and the seeds are consumed by birds, but poison ivy is most often thought of as an unwelcome weed.