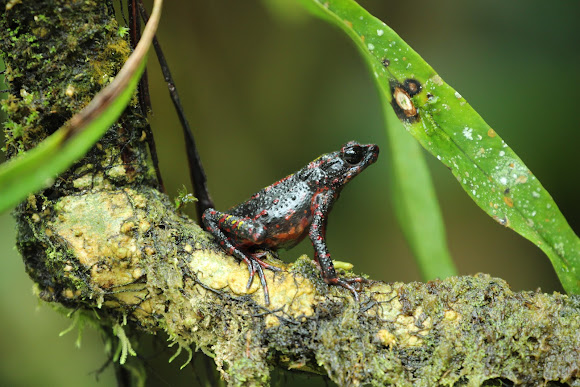 Also known as the Bleeding Toad, this amphibian is critically endangered (IUCN list) and is endemic to West Java.

I spotted this toad on a tree just off the walkway in Gunung Gede national park. The same toad is featured on the pamphlet for the park. Thanks to Jason Alexander for help in finding the latin name.

Better late than never, thanks!

Thanks Luis and Joshua.

Thanks for SOTD and all the kind comments everyone. I had no idea when I spotted this that it was such a significant find. Hopefully some of my other spottings turn out to rare as well.

Congrats Dan. Great to see a critically endangered one. Thanks.

Great capture Dan,the eyes are big compared with the head,the red spots make it similar to our mdwife toad,but this one is darker and the yellow strips on the legs and back are very cool,congrats on one more SOTD and thanks for sharing these amazing species with us

Amazing spotting on an amazing trip.
Can't wait for you to come here to Borneo and find something great too!

Great spotting, Dan. Congratulations to you. The photos are great.

Congratulations Dan. It is indeed beautiful.

So wonderful! Can't wait to see all you find in Indonesia! Congratulations on SOTD.

Beautiful , Dan!! Congratulations! you are amazing!

What a great spotting, Dan!