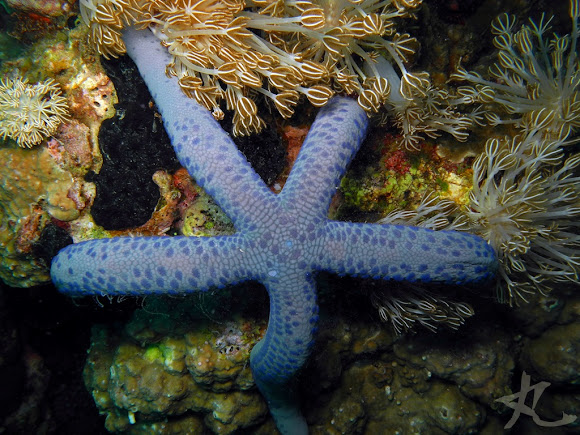 The Azure Sea Star, also called Blue Sea Star, is characterized by five cylindrical arms with a bright blue or light blue body color and yellow tube feet. Other colorations, such as green, pink, and yellow, have also been observed in this species (it depends on the exact ratio and combination of linckiacyanin and yellow carotenoid pigments). The blue coloration is thought to be an adaptation -- a warning to predators of its toxicity. Individuals can grow up to 30 to 40cm across. It feeds on marine worms and other invertebrates, algae, and detritus. Basically, it's an opportunistic or omnivorous feeder. On the other hand, it falls prey to parasites and other predators, such as the Harlequin Shrimp (Hymenocera picta). As with other sea stars, this species can regenerate its arms if severed -- the animal will sometimes detach a limb in order to escape predators. Severed arms, given the chance, can also regenerate the rest of its body!

This common starfish inhabits the tropical waters of the Indian and Pacific Oceans, from the western Indian Ocean to southeastern Polynesia. Individuals have been observed in shallow, multi-leveled areas in upper zones of sunny reefs and reef fringes. This sea star is extremely sensitive to changes in temperature, oxygen content and pH levels.

I see this starfish a lot everywhere I dive in my part of the world. This one, though, gave me my first glimpse of it spawning (watch the video). Its body was arched high above its perch, and that's how it attracted my attention. The 4th photo is of a different individual. It's of the same species but mutated.