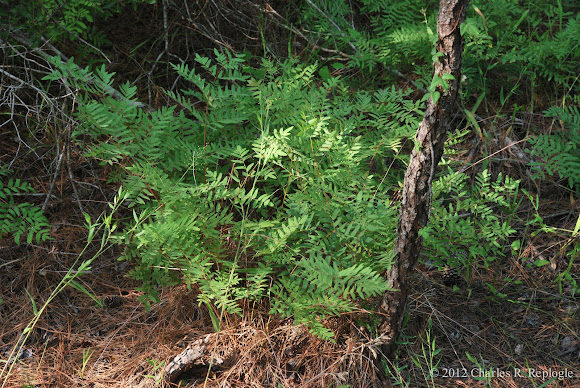 Osmunda regalis is a deciduous, herbaceous plant which produces separate fertile and sterile fronds. The sterile fronds are spreading, 60-160 cm tall and 30-40 cm broad, bipinnate, with 7-9 pairs of pinnae up to 30 cm long, each pinna with 7-13 pairs of pinnules 2.5-6.5 cm long and 1-2 cm broad. The fertile fronds are erect and shorter, 20-50 cm tall, usually with 2-3 pairs of sterile pinnae at the base, and 7-14 pairs of fertile pinnae above bearing the densely-clustered sporangia. The "Royal" name derives from its being one of the largest and most imposing European ferns. In many areas, it has become rare as a result of wetland drainage for agriculture. [edit]