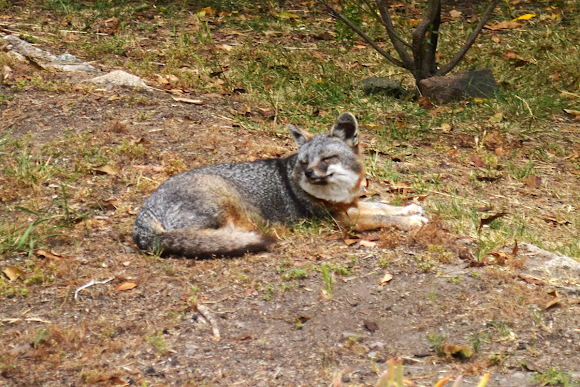 From Wikipedia: "The island fox is significantly smaller than the gray fox and perhaps the smallest fox in North America, averaging slightly smaller than the swift and kit foxes. Typically the head-and-body length is 48–50 cm (18–20 in.), shoulder height 12–15 cm (4–6 in.), and the tail is 11–29 cm (4–11 in.) long, which is notably shorter than the 27–44 cm (10–17 in.) tail of the gray fox. The island fox weighs between 1 and 2.8 kg (2.2 and 6.2 lb). The male is always larger than the female. The largest of the subspecies occurs on Santa Catalina Island and the smallest on Santa Cruz Island. The island fox has gray fur on its head, a ruddy red coloring on its sides, white fur on its belly, throat and the lower half of its face, and a black stripe on the dorsal surface of its tail. In general the coat is darker and duller hued than that of the gray fox. The island fox molts once a year between August and November. Before the first molt pups are woolly and have a generally darker coat than adult foxes."

From Wikipedia: "Its preferred habitat is complex layer vegetation with a high density of woody, perennially fruiting shrubs. The fox lives in all of the island biomes including temperate forest, temperate grassland and chaparral, with no island supporting more than 1,000 foxes."

This is Tachi. She was the island's ambassador fox and lived in captivity because she was part of a captive breeding program to help bring the foxes back from the brink of extinction. They were originally going to release her into the wild like her littermates but she got an infection and got too used to her handlers while they were treating her so she couldn't survive in the wild alone. She passed away last year from cancer.