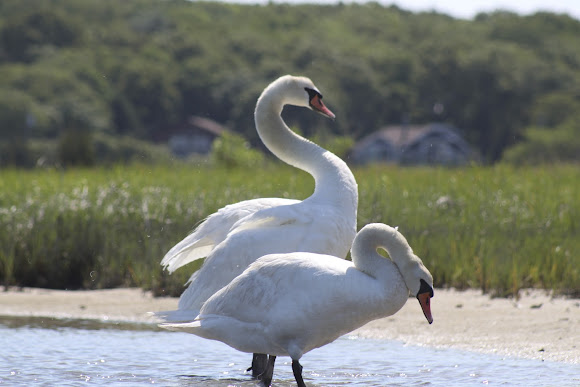 The Mute Swan (Cygnus olor) is a species of swan, and thus a member of the duck, goose and swan family Anatidae. It is native to much of Europe and Asia, and (as a rare winter visitor) the far north of Africa. It is also an introduced species in North America, Australasia and southern Africa. The name 'mute' derives from it being less vocal than other swan species. Measuring 125 to 170 centimetres (49 to 67 in) in length, this large swan is wholly white in plumage with an orange bill bordered with black. It is recognisable by its pronounced knob atop the bill.

The Mute Swan is found naturally mainly in temperate areas of Europe across western Asia, as far east as the Russian Maritimes. The Mute Swan is protected in most of its range, but this has not prevented illegal hunting and poaching. It is often kept in captivity outside its natural range, as a decoration for parks and ponds, and escapes have happened. The descendants of such birds have become naturalised in the eastern United States and Great Lakes, much as the Canada Goose has done in Europe.