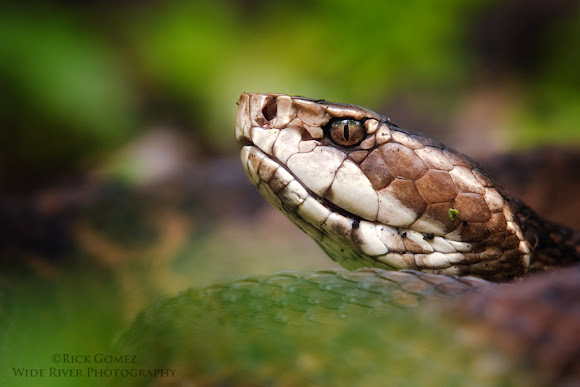 Being that I am new to Project Noah, I decided I will share some of the older spottings that I have documented. This is the infamous water mocassin, or cottonmouth (as I usually call them). This is a semi-aquatic pit viper found in the Southeastern US. On my last post of the gray rat snake, I mentioned how to identify whether or not a snake in North America is venomous by looking at the pupils. As you can see here, this snake has "cat eyes" or vertical slits as pupils, while the rat snake had round pupils. This is true of all venomous snakes in the US except for coral snakes. Elapids like the coral snake, cobras, mambas, taipans, etc. have round pupils as well, but they are mostly found in the old world regions like Africa, Asia and Australia. The cottonmouth is definitely venomous. They deliver a tissue destroying hemotoxic venom. While the venom can be fatal, it is not an extremely deadly snake like a mamba or king cobra would be. A healthy adult can usually survive an agonizing envenomation from this snake, but left untreated for several hours, the bite from this snake will often result in the amputation of a limb. There are many stories about the aggresion of these snakes. Often, these stories have something to do with a cottonmouth chasing somebody down or jumping in a boat. These stories are truly exaggerated. For the most part, these snakes are generally calm, but are not quick to flee as most other snakes would be. They will stand their ground and flash their cotton-white mouths in order to break their camoflauge and give you a warning that they are there. Most venomous snakes have a warning and are somewhat reluctant to bite as they would rather save their venom for hunting. I have encountered hundreds of these in the Florida Everglades and Big Cypress Preserve within close range and I have never been struck at, let alone chased by one. I would aso like to add, if you are in or around the Florida Everglades, a spotting of a large snake with vertical slits in the pupils may also include the invasive, but non-venomous burmese python... Sorry for the confusion.

Found in the Fakahatchee Preserve in South Florida. This is the largest cottonmouth I have personally ever seen in the wild. It was well over 4 feet in length. I have noticed that the cottonmouths I see in the Fakahatchee retain much of their juvenile (gloden-copperish) coloration and pattern throughout adulthood. In the rest of the Everglades, they retain a darker brown color, while their northern counterparts can be almost black as adults.

I agree whit Aaron wonderful shots and info :) I respect very much this guys
I have a bad experience whit one of this.

This is a great picture and description of the water moccasin. They make me very nervous, but I've seen a few of them in the wild now and they behave just like you described here. Would you please add these photos to my mission for Florida Invasives: www.projectnoah.org/missions/12560295.
Thanks for the good information and glad to see your post here on Project Noah.

Stunning shots Rick. Welcome to the community and thanks for sharing your knowledge.