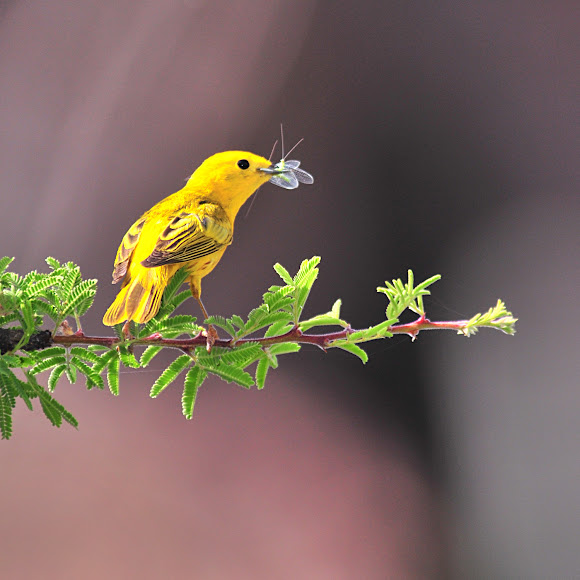 Size & Shape Yellow Warblers are small, evenly proportioned songbirds with medium-length tails and rounded heads. For a warbler, the straight, thin bill is relatively large. Color Pattern Yellow Warblers are uniformly yellow birds. Males are a bright, egg-yolk yellow with reddish streaks on the underparts. Both sexes flash yellow patches in the tail. The face is unmarked, accentuating the large black eye.

Yellow Warblers breed in shrubby thickets and woods, particularly along watercourses and in wetlands. Common trees include willows, alders, and cottonwoods across North America and up to about 9,000 feet in the West. In winter they mainly occur in mangrove forests of Central and South America.

Behavior Look for Yellow Warblers near the tops of tall shrubs and small trees. They forage restlessly, with quick hops along small branches and twigs to glean caterpillars and other insects. Males sing their sweet, whistled songs from high perches. The nests of the Yellow Warbler are frequently parasitized by the Brown-headed Cowbird. The warbler often builds a new nest directly on top of the parasitized one, sometimes resulting in nests with up to six tiers. Life can be dangerous for a small bird. Yellow Warblers have occasionally been found caught in the strands of an orb weaver spider’s web. The oldest-known Yellow Warbler was banded in New York in 2001 and then caught again (and re-released) in 2011, also in New York. It was at least 11 years old at the time.