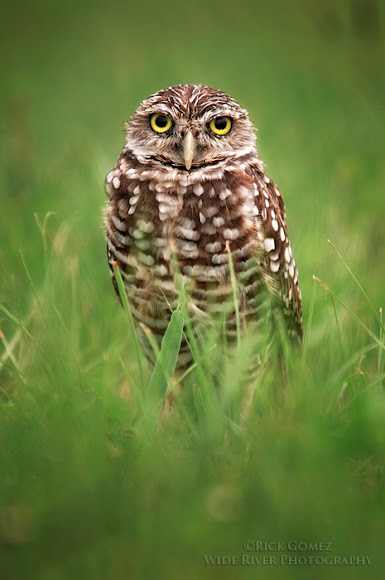 Like most owls, the burroung owls are crepuscular, which means they prefer to hunt at dusk and dawn. However the burrowing owl can also be seen throughout most of the daylight hours, preferring to sleep through the hottest and coolest periods of the day and evening. Burrowing owls roost and nest in the burrows and chambers of the gopher tortise (in the east) and the prairie dogs (out west). This is an endangered species that is primarily threatened by habitat destruction. Rattle snakes, who often share the same types of burrows, are often captured for rattle snake round ups. The burrows that these snakes inhabit are the same as these owls and people usually use gasoline to coax the snakes out of their burrows. The gasoline is toxic to all animals that inhabit these burrows. This puts all of these animals' existence at risk, making most of them endangered.

that is effing cool.

And welcome to Project Noah!!

Crystal clear!! Great shot, Rick!! I'd love you to add this to the mission Raptors of North America: http://www.projectnoah.org/missions/8627...