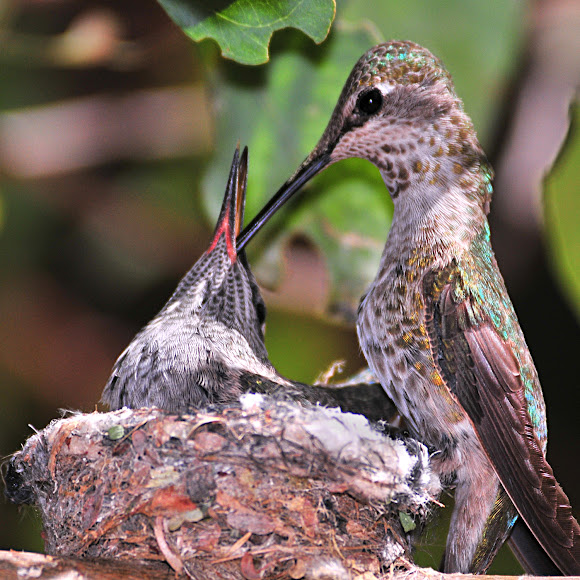 Size & Shape Tiny among birds, Anna’s are medium-sized and stocky for a hummingbird. They have a straight, shortish bill and a fairly broad tail. When perched, wingtips meet the tip of their short tail. Color Pattern Anna’s Hummingbirds are mostly green and gray, without any rufous or orange marks on the body. The male's head and throat are covered in iridescent reddish-pink feathers that can look dull brown or gray without direct sunlight.

Behavior Anna’s Hummingbirds are a blur of motion as they hover before flowers looking for nectar and insects. Listen for the male's scratchy metallic song and look for him perched above head level in trees and shrubs. On rare occasions, bees and wasps may become impaled on the bill of an Anna's Hummingbird, causing the bird to starve to death. Native Americans held hummingbirds in high esteem. Many of their legends describe them as busily bring the rain to quench eruptions or poking holes in the night sky that became the stars. The Navajo say that the characteristic mating dive is a way for them to check what is above the blue of the sky. The iridescent throat patch of male hummingbirds is called a gorget. The Anna’s gorget extends over its head, making it more of a balaclava than a bib. Oddly, female Anna’s have a tiny red gorget—females of most species have none. Anna's Hummingbirds normally have a body temperature of around 107 degrees Fahrenheit—that's a scorching temperature for a human. When outside temperatures fall, Anna's and many other species of hummingbirds enter torpor. Their breathing and heart rate slow, and their body temperature can fall as low as 48 degrees Fahrenheit When the temperature warms, the hummingbirds can become active again in a few minutes.

Beautiful spotting and details in the photo.

Please consider adding this lovely spotting to the Animal Architecture mission at http://www.projectnoah.org/missions/8082...
And thanks for all the information; it makes the picture even more interesting.