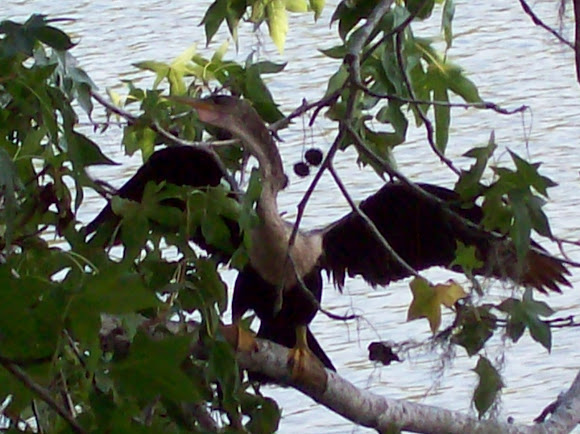 The Anhinga (Anhinga anhinga), sometimes called Snakebird, Darter, American Darter, or Water Turkey, is a water bird of the warmer parts of the Americas. It is a cormorant-like bird with an average body length of 85 cm (33 in), a wingspan of 117 cm (46 in), and a mass of up to 1.35 kg (3.0 lb). It is a dark-plumaged piscivore with a very long neck, and often swims with only the neck above water. When swimming in this style the name Snakebird is apparent, since only the colored neck appears above water the bird looks like a snake ready to strike.

The American Anhinga has been subdivided into two subspecies, A. a. anhinga and A. a. leucogaster, based on their location. A. a. anhinga can be found mainly east of the Andes in South America.

yeah, me too, the wildlife is great and its more or less the Georgian and Floridian Galapagos.... :) there is also a lot of wild horses!!

Great spotting! I've been wanting to go to Cumberland Island for a while.

Thanks! It was drying its wings off from swimming; your spotting is great too! :)

You captured a great picture!