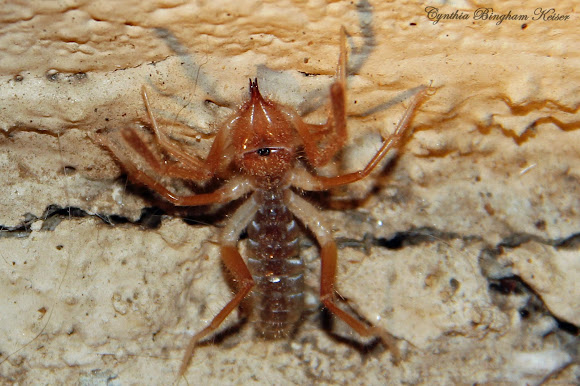 This is the first organism that has actually scared me! I was happy to learn that these are NOT VENOMOUS as they don't have venom glands! They do have very strong jaws and can deliver a nasty bite. This arachnid was 1 inch long with teeth on the chelicera (last image). I didn't think it was an arachnid since it appeared to have ten legs but the front two are actually the pedipalps. When it ran, the pedipalps were held forward and off of the ground. The two eyes are centrally located. Despite the name, this is not a scorpion and does not have the tail.

Backyard at night. "Warm arid places, mostly deserts and sandy areas, but some found in forests and grasslands. (In California) 200 spp. in 12 genera of 2 families in NA; >1000 spp. in 140 genera of 12 families worldwide." - BugGuide

"The names Camel Spider, Wind Scorpion, Sun Spider are sometimes used but are misleading, as the creatures are not closely related to either scorpions or spiders" - BugGuide. "They are generally considered beneficial since they feed on ticks, mites and other pest arthropods." - Natural History of Orange County, California. The pedipalps "function partly as sense organs similar to insects' antennae, and partly in locomotion, feeding and fighting." - Wikipedia

I think they are too, injica! Thank you for your comment.

It sure does. When I was taking photo's I thought that!

Has similar markings of the Jerusalem cricket?

Thanks Torrey. This was my first time spotting it and it wasn't very pleasant. It ran very fast, right next to my foot from behind me in low light. Eek!

Great shots. I have never seen this spider before.