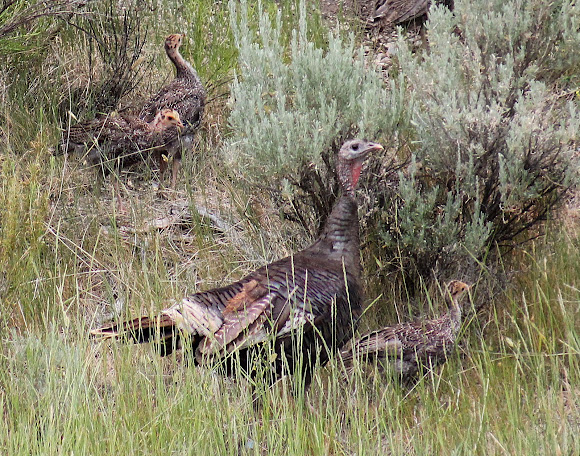 Adult wild turkeys have long reddish-yellow to grayish-green legs and a black body. Males, called toms or gobblers, have a large, featherless, reddish head, red throat, and red wattles on the throat and neck. The head has fleshy growths called caruncles. When males are excited, a fleshy flap on the bill expands, and this, the wattles and the bare skin of the head and neck all become engorged with blood, almost concealing the eyes and bill. The long fleshy object over a male's beak is called a snood. When a male turkey is excited, its head turns blue; when ready to fight, it turns red. Each foot has three toes, and males have a spur behind each of their lower legs. Male turkeys have a long, dark, fan-shaped tail and glossy bronze wings. As with many other species of the Galliformes, turkeys exhibit strong sexual dimorphism. The male is substantially larger than the female, and his feathers have areas of red, purple, green, copper, bronze, and gold iridescence.

High mountain valley with access to underbrush and numerous rivers.

I don't know much about turkeys but would love to know if anyone can help me determine if this was two females with their poult or a mated pair of turkeys with their poult. In the last picture 2 adults can be seen with 8-10 poult total.

Seeing your photos reminded me of the ones we saw last April in Hawaii so I found the photos. No poults in my photos that I can see but I know they do breed there. Here is my spotting:
http://www.projectnoah.org/spottings/129...
Thanks for sharing your and reminding me of that lovely sunny morning spotting!

Thanks Birdlady! It was my first time seeing wild turkeys, I was very excited! ha!

Thanks Christy! That was my guess, two females, but I really wasn't sure. The females are actually very pretty for female birds!

Nice series, Emily...I believe they're 2 females...the turkeys in my parents' neighborhood seem to be hanging out in groups of females and poults...I think last year's babies are in this group...not sure though...they don't sit still for very long!!! Dried corn seems to be pretty irresistible to them.

http://www.projectnoah.org/spottings/103...
Emily they jump right over the separating fence and strut all over the neighborhood. I wonder if people are aware that a "Turkey Salesman" was at the door while they were away.

Thanks for your input Karen! Interesting!

...btw, is the plural poult or poults?

Thanks everyone! I wasn't as close as the pictures make it seem! I have a fairly descent zoom lens and I heavily crop my pictures when I get home!

...and Emma thanks for posting your link! I like to see other's similar spottings!

...and thanks for the correction on the chicks/babies. I will change the terminology to poult!

Great series! How did you get so close? (BTW, a turkey chick is a poult)

Cool, the perfect place for them to be, kind of high brush!

Emily,we have lots of turkeys in our open space.I posted a turkey family pic in one of my spottings.
I will look carefully and let you know, Does seem like two females are sharing the parenting.
I am seeing some surprising pictures about turkeys on Noah. Turkeys flying,turkeys sitting on the tree...... Normally I see them strutting around. i do find feathers in front of some homes. i read that turkeys leave a feather behind as a reward ,sometimes.

Thanks Jackie and Emma! "Poults". That's a new term for me, thanks! Any thoughts on if the adults in the 3rd picture are a mated pair or two females? 8-10 poults seems like a lot for just one turkey, but I don't know.

Also, I will look into that subspecie you mentioned, thanks again!

Krista, I know! I thought there were 4-5 babies too! Once I got home and started counting I realized there were more!

The young are known as poults. Interestingly, there are five subspecies of wild turkey, four in the USA with one additional subspecies in Mexico Where these are, they would most likely be considered the Merriam's subspecies .

turkey babies are known as "Poult"

Wow, there were a lot more babies than I thought. I didn't even see the second Turkey.