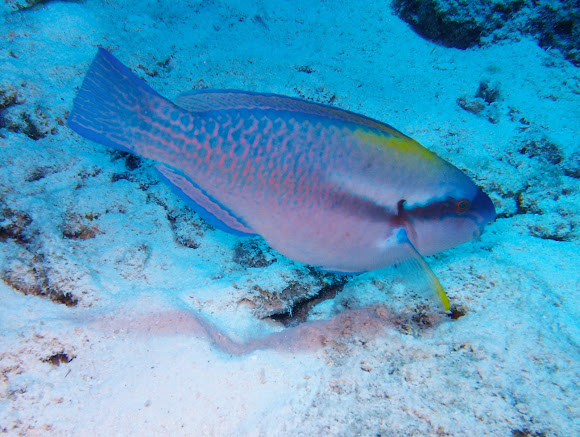 Terminal phase: Body blue to green, with a gold to yellow spot or stripe above and behind the pectoral fin. Dorsal fin with a distinct pink, yellow or orange stripe down the middle that is broken by blue to green linear markings. Tail dark blue or green, with yellow or orangish linear markings between the borders. Size up to 35 cm. Like the wrasses, the parrotfishes have two types of reproductive behavior. The younger and not so colorful males fertilize together with other males the eggs of one single female, while colorful, large males have each their own territory where one male fertilizes one female. Remarks: Initial and juvenile phases of the Striped parrotfish often mix with similar age Princess parrotfish (Scarus taeniopterus). Princess parrotfish can be distinguished by the dark borders on the tail.

Habitat: They swim about reefs using their pectoral fins; the tail is only used for burst of speed. They use their 'beaks' to scrape algae and polyps from corals and rocks. They are often seen defecating, what looks like white clouds, which consists mainly of coral limestone. Common to 25 m depth. Distribution: Common in Florida, Bahamas and Caribbean. Seen in the coral reef Alice in Wonderland, Bonaire.