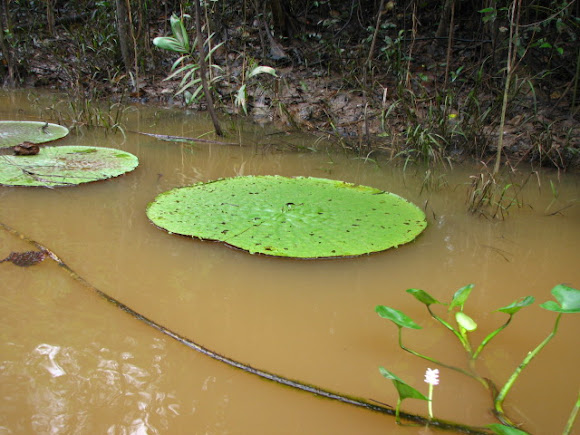 Also known as the Giant Amazon Water Lily, this specimen was approxmiately 4 feet in diameter - on the small side! The leaves of the giant Amazon water lily can grow over 2.5m (8’) across. The flowers are 30cm (12’’) wide and the stems or leaf stalks grow with along with rising flood waters and can exceed 6m (20’) long. These amazing plants are well adapted to life in the Amazon. They have sharp defensive spines on the underside of their leaves, on their flower buds, and leaf stalks which defend them from fish and other animals. The giagantic lily pads stay afloat because of a web-like structure of veins – all filled with air. They can even support the weight of a small adult - although we don't recommend trying it!! Their large leaf surface area helps them capture the maximim amount of sunlight and the red undersides of the leaf helps them capture different wavelenghts of light maximizing their ability to create food even more! They have a huge flower which only opens at night. On the first night, the pure-white flowers open and emit a pineapple like fragrance. Scientists have discovered a chemical reaction inside the flower which heats the bloom to as much as 12°C (20°F) above the air temperature, helping to disperse the perfume. All this is done to attract a very specific pollinator - the scarab beetle pollinator (Cylocephata castaneal). Once the beetle is inside the flower, daylight triggers the flower to shut, trapping the beetle inside. The beetle gets coated with pollen and when the flower re-opens the following night, the beetle escapes and carries the pollen on to the next newly opened flower. The flower left behind is now pink, odorless, and completely unattractive to the next beetle that may pass by.

Bet you didn't know that the underside of the Giant Amazon Waterlily was probabaly one of the first cases of biomimicry! The undersides of the giant leaves inspired one of the most famous examples of Victorian architecture. Architect, Joseph Paxton, sketched the competition-winning design for the building that housed the 1851 Great Exhibition in Hyde Park. His adventurous design, at the cutting edge of engineering in its day, resulted in a beautiful building with cast iron framing and the largest panes of plate glass made at the time. It became known as the Crystal Palace and earned Paxton a knighthood. See: http://data.greatbuildings.com/gbc/drawi... for an image

Just added a few fascinating facts about the Giant Amazon Waterlily. Who knew they inspired the building of the Crystal Palace in London? Early biomimicry for sure!