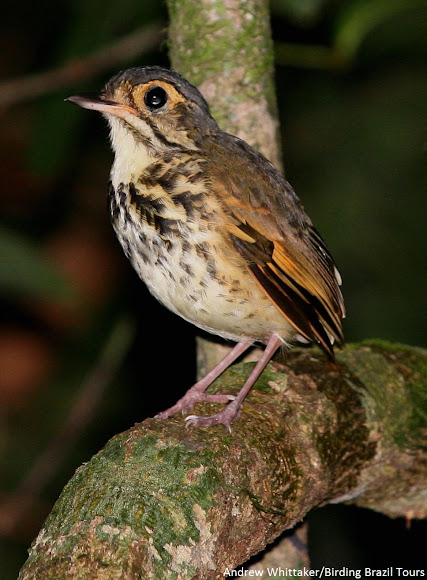 Adult in response to tape-playback while working on the research for species description.

The new species of Antpitta from Amazonian Brazil was described in The Auk 129(2):338-351, April 2012 by Goeldi Museum researchers. In 2007 Andrew Whittaker discovered this new unnamed Antpitta which he mentioned in his papers from 2008 and 2009. Then Goeldi reserchers added more molecular, morphology and vocal data to confirm this new species. The Alta Floresta Antpitta (Hylopezus whittakeri) is a Brazilian endemic found in terra-firme forest, south of the Amazon between the Madeira river east to the Xingu river. Please note the scientific name was given in honor of Andrew Whittaker, an English ornithologist who moved to Brazil some decades ago who fell in love with the Amazon and has helped the scientific knowledge of Brazilian birds through his extensive fieldwork during countless expeditions as a birding guide. Video taken in Alta Floresta, Mato Grosso, Brazil in June 2012.

congrats , missed that one yesterday :-)

What an awesome story Andrew! Thanks for sharing this little beauty with us and welcome to the community! We're looking forward to seeing more of your spottings.

What a surprising voice on this little bird. It's as surprising as the sound the kakapo makes. Thanks for bringing this to Project Noah Andrew and welcome.

Welcome to Project Noah, Andrew Whittaker. First, it is awesome that you discovered this bird and that it is named for you. Second, your notes are great.

what a wonderful bird! The voice is unique...it seems as though there are balloon like sacs on the neck that inflate during vocalization.