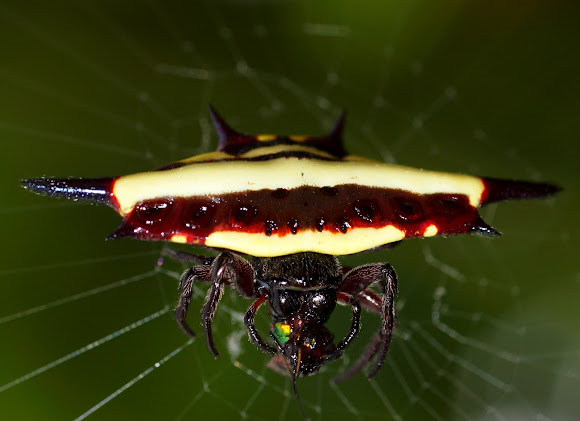 Gasteracantha fornicata is a spiny orb-weaver spider found in North Queensland. Specimens were collected at Cooktown on Cook's 1770 voyage by Banks and Solander. Johan Christian Fabricius described the spider in 1775. It was the first Australian spider to be named and classified in the modern system. The size and colours of the adults vary, but the basic shape is consistent through specimens. The female is found in the daytime in the middle of a web up to 2m in diameter, usually about 2m above ground. The female body length is up to 10mm, width up to 25mm including the strong projecting spiny protuberances. The cephalothorax is dark red-brown or black. The abdomen has strong, transverse bands, either white or yellow, contrasted against alternating dark red-brown to black bands. The spider is relatively timid and not dangerous. It feeds on insects and other arthropods caught in its web.