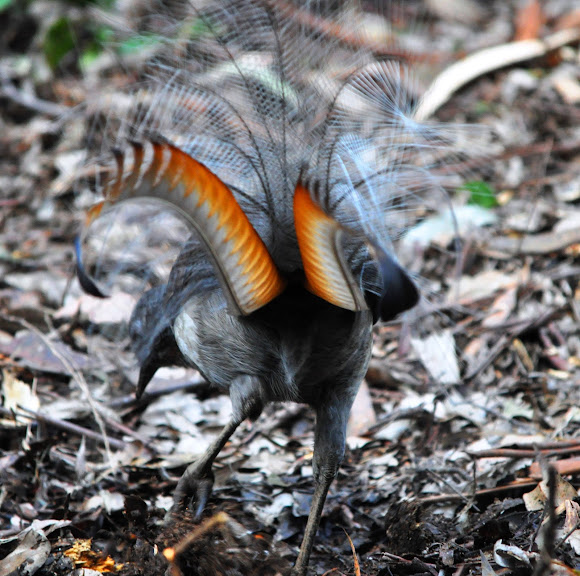 Australian pheasant-like bird in appearance, males have a magnificent tail during breeding season (winter months) which consists of two outer russet orange and white barred feathers with rounded black end, a series of fine filament feathers and two long pin feathers all held over the head when displaying. Grey brown colouring to the rest of the body for female as well, with occasional russet colour to wings and throat, large feet for digging up leaf litter and soil in search of insects, grubs and worms. The call of the male mimics whatever sounds take his interest and can be passed down to new generations. These sounds include many man-made noise such as car horns, sirens, chainsaws, cameras, whistles, etc. Males display on several 'platforms' scattered throughout the bush.

On this our second visit for the season, the male bird was keen to continue looking for food ignoring our presence. He listened intently when bird calls rang out and other sounds also made him curious, but food seemed most important to him at the time. He stood close to us many times with a look of curiosity.

Thanks Jolly Ibanez. Another of my favourite birds.

Thank you LeanneG and Gilma. I feel very privileged to be in the company of nature and bear witness to the things on offer, and the lyrebirds are special to me. Hopefully I can share more images next year with all of you.

Wow! Loving your collection kd. This though, has to be one of my faves. How lucky you are to have seen these magnificent birds.

Yes Mark, breeding season plays a big part in feather colour intensity on a lot of birds. Would be great to see your photos of southern birds. Breeding is usually from about late May through to August depending on region and whether it's Superb or Albert's, sometimes individuals may start activities earlier and later in the season.

And I think they vary with breeding season too. I must check on our locals soon.

Depends on where the setting sunlight is when I take the photos; they're usually in the darkest parts of the forest but when out in clearings as the sunlight filters through it picks up amazing colours on everything including vegetation, and it seems more intense as surrounding is so dark and almost colourless, and eyes struggle to adjust, so have been lucky to capture same with camera.
Looking forward to next season!

Great shots. You don't often catch the colours under the male tail.

I love your lyrebirds! Keep them coming!

Gorgeous kdpicturemaker,congrats and thanks for sharing

Thanks! Has to be one of my favourites too. Would love to see the Albert's one day, but they are few and far between.