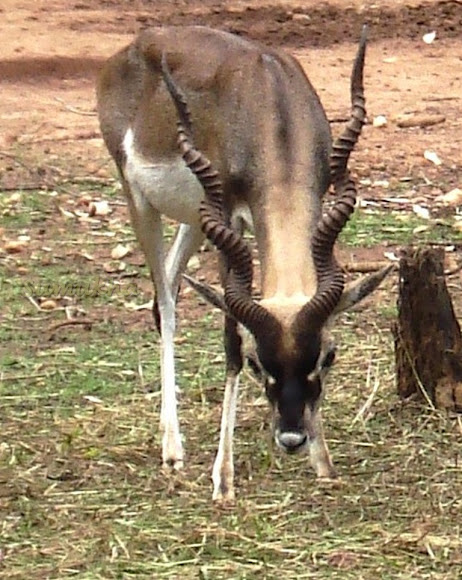 The blackbuck (Antilope cervicapra) is an antelope species native to the Indian subcontinent that has been classified as endangered by IUCN since 2003, as the blackbuck range has decreased sharply during the 20th century. The blackbuck is the only living species of the genus Antilope. Its generic name 'Antilope' stems from the Latin word antalopus, a horned animal.[3] The binomial 'cervicapra' is composed of the Latin words capra, she-goat and cervus, deer. Male blackbucks are dark brown, black, and white and have long twisted horns The horns of the blackbuck are ringed with 1 to 4 spiral turns, rarely more than 4 turns, and can be as long as 79 cm (31 in). A trophy blackbuck is greater than 46 cm (18 in). In the male, the upper body is black (dark brown), and the belly and eye rings are white.

This Male Blackbuck was found in Tyavarekoppa Tiger-Lion Safari near Shimoga town, Karnataka..

Yes Alice.. Those horns are majestic to see..!

Striking pose that shows off the horns!