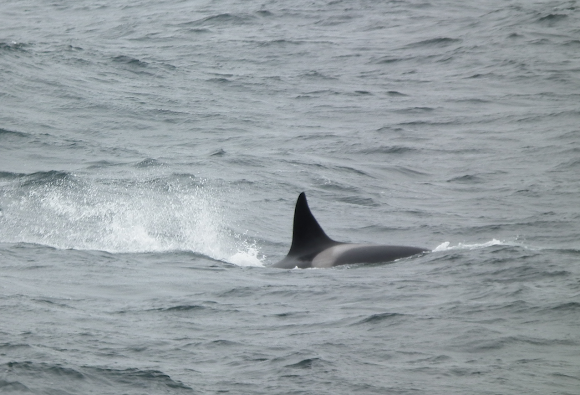 Although also known as the killer whale, it is actually the largest species of dolphin. Very intelligent creatures that live in groups (pods). There are two kinds of orca - those that feed exclusively on fish, and those that feed exclusively on mammals. I spoke to a whale expert who told me that while this holds true in the Pacific, there is a theory that in the Atlantic, the orcas may actually feed on both depending on availability.

Found in all oceans and some seas, prefer higher latitudes and coastal areas

This pod of orcas was spotted very shortly after we crossed the Arctic circle, so were my first polar wildlife spotting. They didn't breach so were difficult to photograph. There were 2 calves in the pod, I think you can see a small baby fin in the "group" photo!

These are so great Laura! Your arctic adventures must have been a thrill. Thank you for sharing these neat experiences with us!

a female or a young male?

Fantastic!!! I have to say I am pretty jealous!!!

Great job! I love orcas, and your picture is fab!

Thanks both, it was an exciting spotting for me!