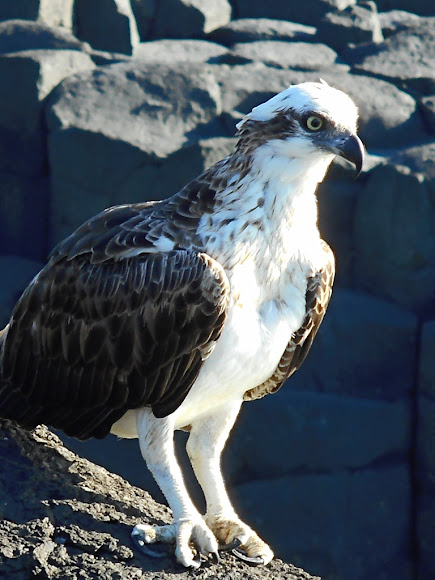 I couldn't believe my eyes when I spotted this bird (fourth photo), at first thinking it was a seagull. It took me roughly 20 minutes to get within about 12-15 metres, and although it didn't seem too phased by my presence, to have moved any closer could have spooked the bird so I was happy to hold back and watch from a respectful distance, crouching behind some rocks. Two things I did notice about this individual - the talons were curled beneath its feet and resting on the sides, not straight out as I would have imagined (first photo). It would also periodically move its head rapidly from side-to-side, as if gauging the distance of potential prey. It repeated this behaviour many time, and its gaze was definitely fixed on something out at sea. I was really excited by this spotting, having never been so close to a wild raptor, but I don't know enough about the species to say if this bird was male or female, mature or juvenile. The eye bands were full and quite dark but the chest bands pale, so perhaps this is an indication of age? Pandion cristatus is also commonly known as Fish Hawk, Fish Eagle, and White-headed Osprey, but despite its propensity to nest near water, is not classed as a sea eagle. The reference links provide plenty of information.

Ospreys are found on the coast and in terrestrial wetlands of tropical and temperate Australia and off-shore islands, occasionally ranging inland along rivers, though mainly in the north of the country. This spotting was at Fingal Head, on the far north coast of NSW. The Tweed River runs adjacent to this peninsular, and the whole area is abundant in marine and bird species. I actually spotted humpback whales and dolphins whilst watching this individual. Local birds are known to nest at Kingscliff just to the south, and on Cook Island which lies just off the coast (last photo). This island is a nature sanctuary, and access is strictly prohibited.

This species was originally classed as a subspecies of Pandion haliaetus (ie: P. h. cristatus), but has recently been given full species status as Eastern Osprey (Pandion cristatus). It's conservation status in most Australian states is secure, but is listed as vulnerable in NSW.

Awesome capture Neil,congrats on the SOTW and thanks for sharing

congrats on spotting of the week, Neil!

Oh wow, thanks very much for the SOTW. Much appreciated.

Congrats Neil, this Eastern Osprey has been selected as Spotting of the Week!

Thanks, Muckpuk. Certain spottings are like that. Birds always frustrate me because they are so quick and some are difficult to photograph, so to have one sit still, particularly a raptor, was a real treat. Yeah, I was excited :)

Very nice picture and I love how you are excited about it! Thank you for your passion.

I probably could have moved a bit closer, but certainly didn't want to push my luck. The bird was calm and I was happy. It was a wonderful experience, and on such a beautiful day too. Thanks, armadeus.4.

Ooooh that is too cool! Wonderful images Neil. It's a pretty special feeling when you're allowed to get so close to any animal. Love your observations!Thank you for sharing :)