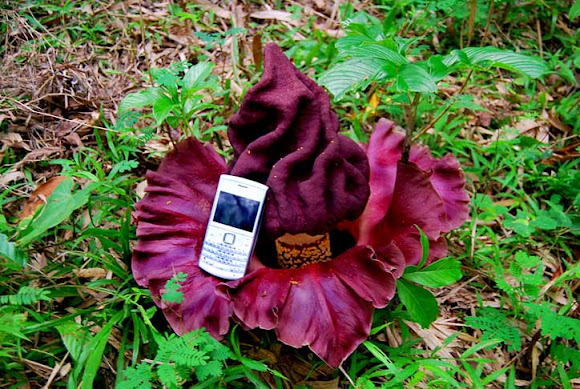 Also known as pungapong, elephant foot yam and Amorphophallus-campanulatus. About 11 inches in circumference. Felt very firm to touch and juicy. Some say it has a bad smell but I never noticed it. Apparently they can grow much larger. This was about a foot or more tall. There were many tiny brown beetles in it's base. Most likely for fertilization as they weren't dissolved the next day. One had yellow dots at the tip and the other did not. I am wondering if there's a male and female of this plant. The last shot is what the leaf looks like. The leaves come out after the plant has flowered and died.

Also called Pongapong in the Philippines. It's root is a tuber and eaten in nortern Samar as a Christmas delicacy with coconut mild and sugar. Supposed rare but I had three on my property. Each a little different from the other.