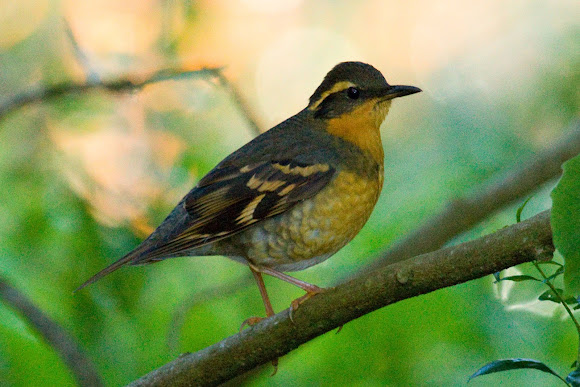 The Varied Thrush is a fairly large thrush species. It can range from 20 to 26 cm (7.9 to 10 in) in length and can span 34 to 42 cm (13 to 17 in) across the wings. Body mass can vary from 65 to 100 g (2.3 to 3.5 oz). Among standard measurements, the wing chord is 11.8 to 13.6 cm (4.65 to 5.35 in), the bill is 1.8 to 2.3 cm (0.71 to 0.91 in) and the tarsus is 2.9 to 3.3 cm (1.14 to 1.30 in). It is similar in size to the widespread American Robin, though the Varied is on average shorter with a heavier, more robust build. In general, Varied Thrushes feature intense orange and black feathers. Adult males exhibit medium orange with a curved gray pattern at the breasts and throats, with grayish-blue tail ends, scruffs, and crowns. They also possess a tufted supraloral stripe and streaks of dark colors on its flight feathers. Its bill is also achromatic, but tan near the bottom of the lower jaw. Its legs are often tawny or dark brown. Females' markings are not as well-defined, with olive-browns and grays, brown hind feathers, and indiscernible gray-brown plumage near the breasts. Young Varied Thrushes are generally brown, though its stomach feathers are white, and initially harbors two orange stripes at the covert feathers.

The Varied Thrush breeds in western North America from Alaska to northern California. It is migratory, with northern breeders moving south within or somewhat beyond the breeding range. Other populations may only move altitudinally. This species is an improbable transatlantic vagrant, but there is an accepted western European record in Great Britain in 1982.[citation needed] Nests in Alaska, Canada and mountains in Oregon and Washington. Prefers moist conifer forest. Most common in dense, older conifer forests in high elevations. Moves to lower elevations during the winter where it is often seen in towns and orchards and thickets, or migrates to California. Seen in flocks during winter of up to 20 birds. well known for individual birds to fly eastward in winter, showing up in just about any state, then returning to the West coast for breeding.