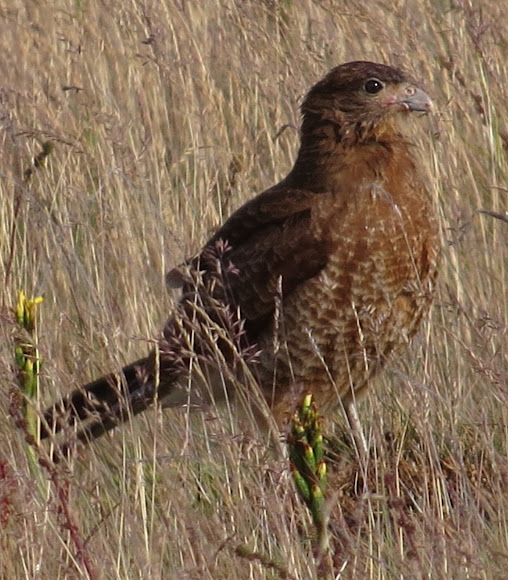 Spotted this Chimango Caracara feeding on a dead animal on the main park road in Torres del Paine National Park, Chile. It is much smaller than the Southern Crested Caracara.

The Chimango Caracara is one of the most common open country birds in southern South America. It inhabits a wide variety of open habitats, such as grassy Andean foothills, heathland, shrub-steppe, marshes, agricultural lands, and along coasts, from southern Bolivia to Tierra del Fuego. The Chimango Caracara is the least patterned of the caracaras; its plumage is mostly brownish with variable dark streaking. It is polytypic with the southern subspecies being darker than the northern. These caracaras feed in small to medium sized groups that roam the countryside looking for just about anything that could be deemed edible and are consummate opportunists; they are an important predator of nestlings, will gather at large insects swarms, and even flock with Kelp Gulls (Larus dominicanus) at shellfish processing plants to feed on discarded scraps. Cornell Lab of Ornithology, Neotropical Birds http://neotropical.birds.cornell.edu/por...