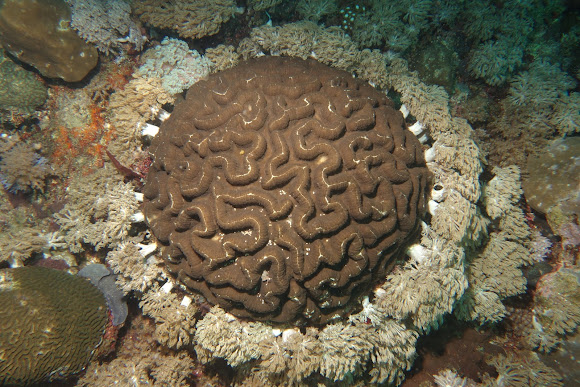 Diploria is a genus of massive reef building stony corals in the family Faviidae, commonly known as the brain corals. This species of reef-building coral has a hemispherical, brain-like shape with a brown, yellow, or gray colour. It has characteristic deep, interconnected double-valleys. These polyp-bearing valleys are each separated by grooved ambulacral ridges. There may be a difference in colour between the valleys and the grooves. During its planktonic larval stage, the coral has locomotion. After that time, it becomes permanently sessile. They usually feeds at night or when there is a current as the current brings in fresh water together with food in the forms of zooplankton. These are captured by the polyps, by extruding mesenterial filaments and tentaces. The polyps have nematocysts which are triggered to hold their prey immobile. The prey is then transported to the mouth with the assistance of mucus and cilia.

That is my favorite type of coral. It totally looks like a think from Doctor Who. But it is an natural phenomenon not dreamt up by Sci-Fi. Nice capture.