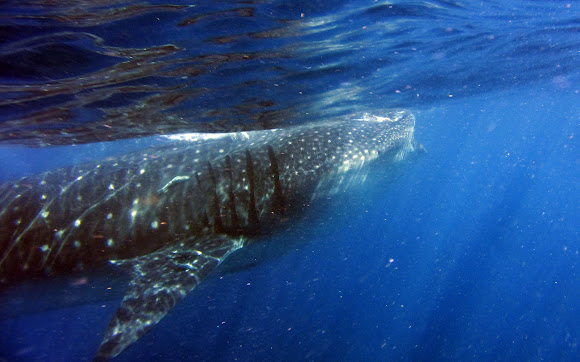 Photo taken open sea near Isla Mujeres Mexico.This one particular has more than 13 mt. Is a slow-moving filter feeding shark and the largest extant fish species. The largest confirmed individual had a length of 12.65 mt and a weight of more than 21.5 tonnes , and there are unconfirmed reports of considerably larger whale sharks. Claims of individuals over 14 mt long and weighing at least 30 tonnes are not uncommon.

This was a day of days for me, around 50 Whale Sharks in the area :) 3 Hrs swimming, adrenaline 100% Wow ther was a moment i have 3 of this wonders around, thanks Mother Nature. During Julay and Agust we have the largest migration of Whale Sharks in the world, last year 2011 scientific´s spot in one day by airplane 203 Whale Sharks.

Thanks Toshimi:)
Thanks so much Sumukha :)

Thanks so much ASH :)

Great! I can't wait to possibly see your new spottings!

Thanks so much ASH, Sachin , Jeannette,
Thanks Antonio i been lucky and maybe i have the same chance on Friday again.

Your welcome! Thank you for re uploading the video, it's great that you had the opportunity to spot such a beautiful animal! Great job!

The video is too cool :)

Thanks ASH , Joshua, jgorneau :)
I just reloaded the video

The video is mesmerizing!

I can't receive your video can you plz re upload it?

I will upload a video latter !

Thanks Gordon , Jeannette, tajminator :)
Thanks Nina the season just start and is amazing i will go a least 5 more times this month i will upload more spotting´s :) this is the beast experience of all to me :)

BTW, I have seen a Whale Shark while snorkeling and it was an AMAZING experience. You are so lucky to get to be so close.

Love, love, love it. I also love Isla Mujeres... I've been to Mexico many times and it's one of my favorite places on Earth!