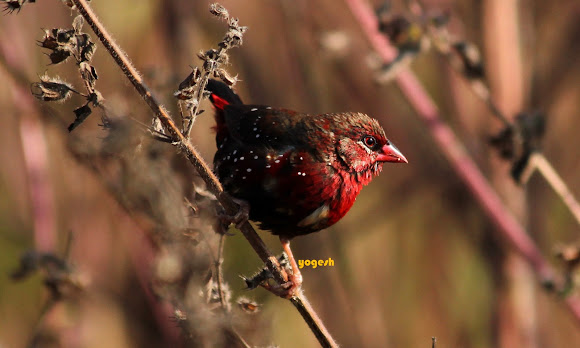 This small finch is easily identified by the rounded black tail and the bill that is seasonally red. The rump is red and the breeding male is red on most of the upper parts except for a black eye-stripe, lower belly and wings. There are white spots on the red body and wing feathers. The non-breeding male is duller but has the red-rump while the female is duller with less of the white spotting on the feathers.

Red Avadavats are found mainly on the flat plains, mainly in places with tall grasses or crops often near water. The species has four named populations. The nominate subspecies is found in Bangladesh, India, Sri Lanka, Nepal and Pakistan; the Burmese form has been called flavidiventris (also found in parts of China, Indonesia, Thailand and Vietnam); the population further east in Java is called punicea and in Cambodia decouxi.