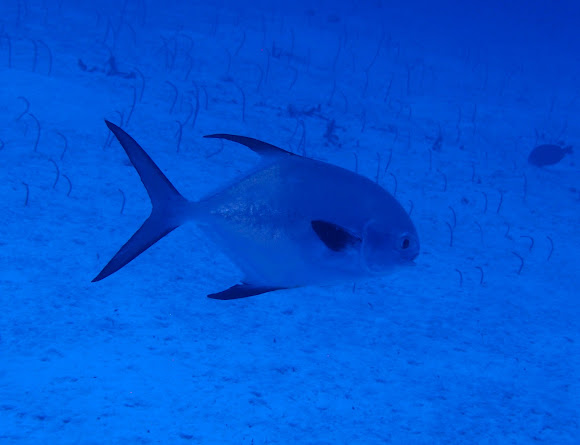 The permit's genus name, ''Trachinotus'' comes from a fusion of the Greek words ' , which means "rough", and ' , meaning "back". The species name for the permit, ''falcatus'', is a Latin adjective, which roughly means "armed with scythes". This serves as a reference to the permit's dorsal fin that occasionally protrudes from the water when schools of permit feed near the surface. Permits can be distinguished by their elongated dorsal fins and anal fin. The dorsal fin is shaped like a scythe. Permit tails are also deeply forked, and their bodies are compressed laterally, making the fish tall and thin when viewed from the front.

Permit are usually found in shallow, tropical waters such as mudflats, channels, and muddy bottoms. As such, this one was spotted in a sand flat located at 30 m between a shallower coral wall and a second one going much deeper. Behind the fish you can observe garden eels. Tori's Reef, Bonaire.