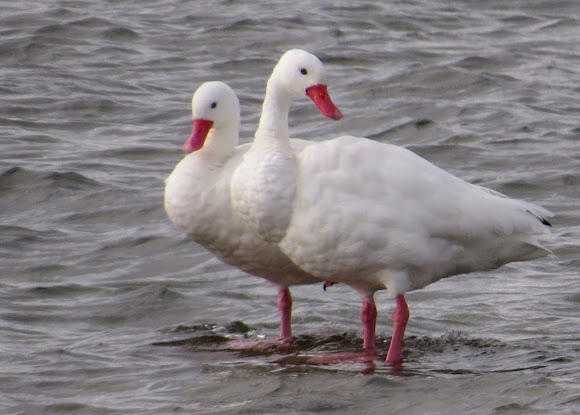 Spotted these Coscoroba Swans feeding in waters off of Puerto Natales, Chile.

Feeding in waters off of Puerto Natales, Chile.

The smallest species of swan, Coscoroba Swans are still one of the largest species of waterfowl in South America. They inhabit swamps, lakes, lagoons and other bodies of fresh water in southern South America. This species is a partial migrant, breeding in southern Chile and Argentina south to Tierra del Fuego, and then moving north in winter; the bulk of the population winters in central and northern Chile and Argentina and Uruguay, with individuals make it as far north southeastern Brazil. There is also a population on the Falkland Islands. Coscoroba Swans are more goose-like in appearance than their Northern Hemisphere relatives. Both sexes are all white, with black wingtips and red bills and legs. The Coscoroba Swan is one of only two all-white waterfowl in South America. The other all-white species, the male Kelp Goose Chloephaga hybrida, is much smaller, inhabits rocky coastlines, and lacks the red bill and legs of the Coscoroba Swan. Though its population was estimated at around 100,000 individuals, BirdLife International has listed the Coscoroba Swan as a species of Least Concern; habitat destruction and degradation through the diversion of wetlands are the chief threats to this species. Cornell Lab of Ornithology, Neotropical Birds http://neotropical.birds.cornell.edu/por...

Thank you DanielePralong--it was great to see so many new bird species.

This is a truly beautiful species. Nice to see them in the wild!