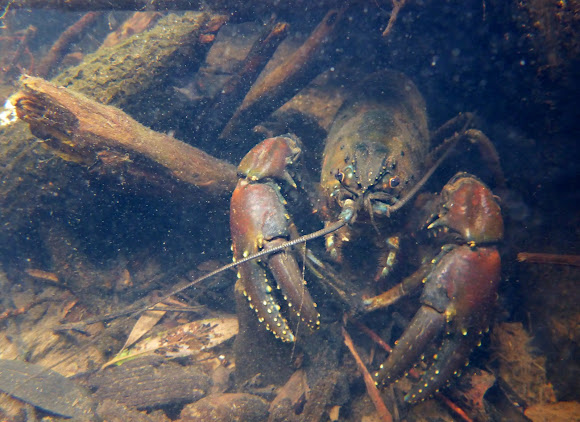 The Tasmanian giant freshwater crayfish (Astacopsis gouldi), also called Tasmanian giant freshwater lobster, is the largest freshwater invertebrate in the world. The species is only found in Tasmania (an Australian island), and is listed as an endangered species due to habitat loss and over fishing. It is also severely threatened by siltation and de-snagging of streams as decaying wood forms the favourite part of its diet. It is not known if the animals are nourished by the wood, the bacteria, algae or invertebrates living in the rotting logs. They also eat leaves, fish and other meat, including other freshwater invertebrates. Source: Wikipedia

These crustaceans inhabit dark, slow-moving rivers and streams with high water quality and little suspended sediment, as well as still, deep pools with logs and overhanging banks to shelter beneath.[4][5][6] The water needs to be below 18°C with high oxygen content.[3] The giant freshwater crayfish was previously found in all rivers that flow into the Bass Strait, which runs between Tasmania and the Australian mainland. Today, however, the distribution is patchy and limited to less disturbed areas.[5] Source: Wikipedia