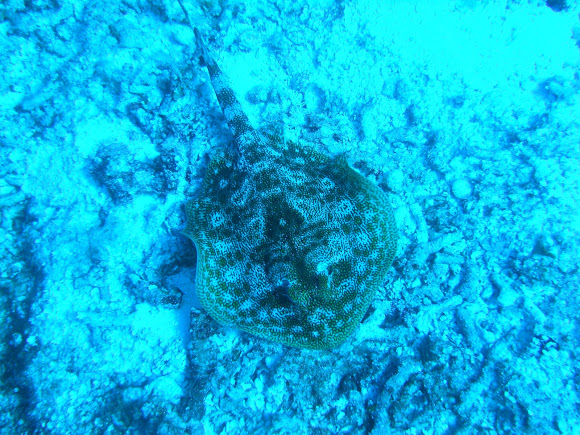 The yellow stingray is small, growing no more than 36 cm (14 in) across and 70 cm (28 in) long. It has a nearly circular pectoral fin disc slightly longer than wide, with a short, obtuse snout. The eyes are immediately followed by the spiracles. There is a narrow curtain of skin between the nostrils, with a fringed posterior margin. The mouth is nearly straight and contains a transverse row of 3–5 papillae on the floor. There are 30–34 tooth rows in the upper jaw and a similar number in the lower jaw, arranged into bands. The teeth are broad-based, with low, blunt crowns in females and juveniles, and tall, pointed cusps in adult males. The teeth of males are more widely spaced than those of females. The pelvic fins have nearly straight leading margins and rounded trailing margins.

The yellow stingray is found throughout the inshore waters of the Gulf of Mexico (where it is the only representative of its family) and the Caribbean Sea, including Florida, the Bahamas, and the Greater and Lesser Antilles to Trinidad. On rare occasions, it ranges as far north as Cape Lookout in North Carolina. It is quite abundant in the Florida Keys and parts of the Antilles, and rather uncommon elsewhere. Off Mexico, this species occupies a salinity range of 26–40 ppt.