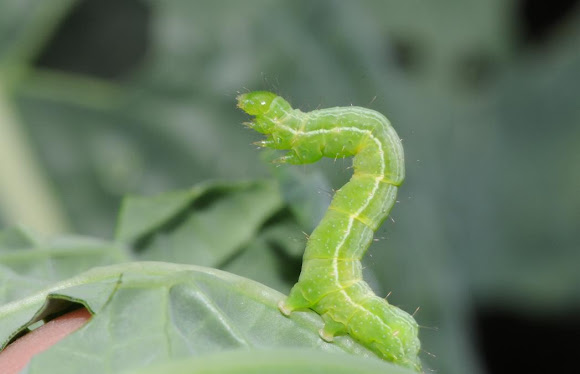 The Cabbage Looper is a member of the moth family Noctuidae. It is found throughout the southern Palaearctic ecozone, all of North America, parts of Africa and most of the Oriental and Indo-Australian region. The caterpillar, a measuring worm, is smooth and pale green with white stripes and is one of a many species called cabbage worm. It is called a "looper" because it arches its body as it crawls, inchworm-style. This species is very destructive to plants due to its voracious consumption of leaves. It is not restricted to cole crops; other plant hosts include tomato, cucumber and potato. The adult of the species is a nocturnal brown moth.

Found on Toscano kale plants in a garden at work.