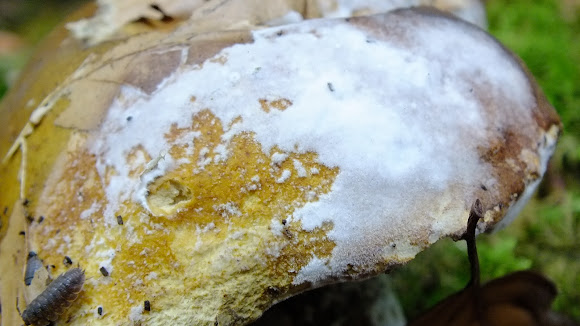 Hypomyces chrysospermus begins infecting its host on the pore surface, but soon spreads to other areas and often completely engulfs the mushroom. Sometimes, this causes the mushrooms to grow irregularly and results in bizarre shapes. The mold forms a smooth layer of mycelium over the mushroom that has a somewhat powdery texture. There are three distinct phases to the growth of the bolete eater, which are easily identified by the color of the mold: white, golden yellow, and reddish brown. During the first phase, Hypomyces chrysospermus is white and fairly smooth. The white phase is the smoothest phase. During this stage, the fungus produces asexual spores that are smooth, elliptic, and lack color. The second phase sees the bolete eater take on a golden yellow color and become more powdery and lumpy. This does not happen all at once, so some areas of the mold may be yellow while others are still white. In this phase, Hypomyces chrysospermus begins producing asexual spores that are round, yellow, and spiny to warty. Finally, Hypomyces chrysospermus turns reddish-brown and develops a pimpled texture. Because the mushroom is well-decomposed at this point, the final stage is rarely seen or collected. The mushy texture of the mostly rotted mushroom also helps to discourage people from collecting it. This phase is characterized by the production of sexual spores, which are long and thin, warty, colorless, and divided into two cells by a septum. Hypomyces chrysospermus is an ascomycete, so its sexual spores are produced inside cells called asci. These asci are found in flask-shaped structures called perithecia. Each ascus starts at the bottom of the perithecium and grows up to the small pore at the top, where it fires off its spores. The pimply texture of the mold during this phase is a result of the perithecia. Each perithecium has a pore that can be found at the center of a pimple.

Parasitic on various species of boletes, which have diverse habitats; widely distributed and very common.

Spotted in a mixed forest near Frieswijk, Holland. (sources:see reference)